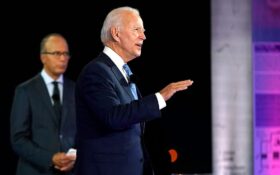 The first presidential debate between President Donald Trump and Joe Biden touched a nerve with many Americans.

And the former vice president says he has one big regret from the exchange.

He’s confessing that he lost his cool under pressure by Trump, and regrets calling the president a clown.

Biden made his admission during his MSNBC town hall Monday night, which critics panned for being a “campaign infomercial” rather than a tough question-and-answer format.

“I did get frustrated,” Biden said. “And I should have said this is a clownish undertaking instead of calling him a clown …”

“If you notice, not one single time that I can recall did he offer a substantive answer or criticism related to a policy matter,” he said.

“… it was all personal … things that had nothing to do with whether you’re going to change these people’s lives for the better.”

But it was ironic then, that critics accused Biden of the very same thing after the town hall had ended.

Biden, who accused of being lobbed softball questions, spent much of his time talking about Trump… and little about policy.

POLITICO writer Marc Caputo called it out front and center.

“NBC’s town hall with Joe Biden & ‘undecided voters’ in Miami didn’t seem to have undecided voters,” Caputo wrote. “Nor was it much of a Miami town hall, which would have way more yelling & pointed questions.”

NBC's town hall with Joe Biden & "undecided voters" in Miami didn't seem to have undecided voters. Nor was it much of a Miami town hall, which would have way more yelling & pointed questions. It was a TV show that doubled as a Biden infomercial. Can't blame him for doing it

But the scorn wasn’t solely reserved for Biden.

Local Tennessee official Chris D. Jackson wrote that the “media never learns,” before mentioning that the fact that the town hall spent the first 12 minutes discussing nothing but Trump.

If Biden is still willing to play along after the media used this very same tactic in 2016,  liberals will almost certainly be in for another rude awakening.

And the former Vice President will have plenty of regrets.