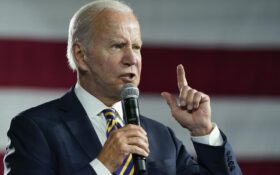 Fox News commentator Tucker Carlson has long accused Big Tech of attempted censorship — and now there may be hard proof.

That’s according to some newly public emails between Facebook and the White House.

Flaherty wrote in the email:

The top post about vaccines today is Tucker Carlson saying they don’t work. Yesterday was Tomi Lahren saying she won’t take one. This is exactly why I want to know what ‘reduction’ actually looks like- if “reduction” means “pumping our most vaccine-hesitant audience with Tucker Carlson saying it doesn’t work” then…I’m not sure it’s reduction!

Thanks–I saw the same thing when we hung up. Running this down now.

The newly public email doesn’t elaborate on the term “reduction.”

The email also neglects to name any specific remarks from Carlson. In 2021, Fox News — Carlson’s employer — was requiring all its employees to choose between either vaccination or daily testing.

It remains unclear whether the White House actually succeeded in persuading Facebook to censor Carlson.

Some liberals have denounced the email as fake.

This is so fake. It is sent from an iPhone? Come on man 🤦🏼

However, the White House has seen similar similar emails leak in the past. In September, the New York Post obtained an April 2021 email scheduling a meeting for White House staffers “briefed by Twitter on vaccine misinfo.”

In spite of emails, the two attorneys general have been facing a difficult battle in court. They requested a deposition from Flaherty, but they saw their requests blocked by a three-judge panel on a federal appeals court.

“As Press Secretary, Psaki’s role was to inform the media of the administration’s priorities, not to develop or execute policy,” another three-judge panel wrote on Thursday, according to The Hill. “Unsurprisingly, then, the record does not demonstrate that Psaki has unique first-hand knowledge that would justify the extraordinary measure of deposing a high-ranking executive official.”

Landry remains optimistic. “We have no problem with the court’s request. We look forward to obtaining more discovery,” the attorney general said, according to The Hill.

He added on Twitter, “Government censorship is bi-partisan. If they don’t like you, they will censor you. NO ONE is safe when the first amendment is violated!”