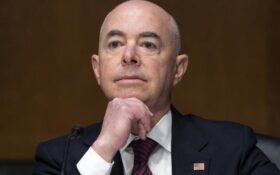 As a presidential candidate, Joe Biden promised to stop the construction of the border barrier.

“There will not be another foot of wall constructed on my administration,” Biden told a reporter from NPR in August 2020. “I’m going to make sure that we have border protection, but it’s going to be based on making sure that we use high-tech capacity to deal with it. And at the ports of entry — that’s where all the bad stuff is happening.”

Now with Biden in the White House and the U.S.-Mexico border crisis spiraling out of control, the administration is quietly restarting construction of the border wall first promised by former President Donald Trump.

The administration plans to focus on upgrading the existing structures. For example, Homeland Security intends to install drains, clean the construction sites and safety-proof the roadways.

However, officials apparently said that the administration plans to close gaps between parts of the barrier, contrary to Biden’s campaign promise.

“Prior to work, the Department of Homeland Security will work closely with stakeholders, including impacted landowners, tribal, state, and local elected officials, and federal agencies to seek input and help on prioritizing potential remediation activities within each Sector,” the department said in a statement obtained by ABC News.

“CBP intends to prioritize remediation projects needed to address life and safety issues – including the protection of individuals, [Border Patrol] Agents, and nearby communities from potential harm – and avert environmental damage or degradation.”

The previous president, Donald Trump, helped to construct a partial barrier along the southwestern border. For several hundred miles, the Trump administration upgraded the existing fence into a network of steel barriers, complete with access roads and surveillance equipment.

Biden halted construction of the border barrier last year, and his administration reviewed the structures for risks to health and safety.

Now, the administration is apparently acting on its review.

Some immigration doves have slammed Biden for flip-flopping on this issue. Some have doubted whether Biden can actually call it “remediation.”

“He said not one more for the wall,” Rey Anzaldua, an annoyed resident of Hidalgo County in Texas, told NPR last year. “As you can see, Biden didn’t keep his word.”