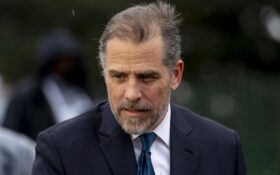 It’s no secret that President Joe Biden has tried to keep America in the dark about his son, Hunter Biden — but now, his cover-up efforts are comparable to Watergate, Whitewater, or the Iran-Contra scandal, according to an influential Republican congressman.

The Biden administration is hiding 400 documents about Hunter Biden’s dealings with China, Russia, and Ukraine, according to an expert in Freedom of Information Act (FOIA) requests.

The president’s stonewalling “has the potential to be one of the biggest cover ups in American history,” according to Rep. Jim Comer, R-Ky., the likely incoming chair of the House Oversight and Reform Committee.

The saga began in November 2020, when Colorado attorney Kevin Evans filed a FOIA request for the federal government to turn over all documents that would show “any relationship, communication, gift(s), and/or remuneration in any form between President Biden’s son Hunter and brother Jim Biden and China, Russia or Ukraine.”

The files could expose an alleged grift run by then-Vice President Biden, in which critics claimed Hunter Biden funneled foreign funds from those who wished to curry favor with his dad.

“They eventually produced about 60 pages of documents,” but Evans said those were worthless — nothing but letters from congressmen asking the Department of Justice to produce the same information Evans was seeking.

So, Evans sued the Biden administration to turn over the full documents last March.

Shortly after filing suit, Justice Department lawyers owned up to having 400 pages of “sensitive” documents subject to his FOIA request at a court hearing in May 2022, Evans said.

“They said, ‘Well we have these 400 pages of potentially responsive documents, we need to review them,’” Evans told the media.

But by last July, something happened: The DOJ, which never turned over the documents, publicly raised questions about whether the information even exists.

Biden administration DOJ officials repeated a phrase known as the “Glomar response”: They said they can “neither confirm nor deny” the documents in question.

“To me, it seems the cat’s out of the bag here after having disclosed the documents exist,” an outraged Evans said. The DOJ has already “disclosed and put on the record that potentially responsive documents exist.”

It wouldn’t be the first time  the Deep State protected Hunter Biden from charges they engaged in a multimillion-dollar, international influence-peddling operation, critics have claimed.

The Twitter Files verified that FBI agents and other federal employees coerced social media leaders for months to claim any leak about Hunter Biden’s laptop as a complex “Russian disinformation” plot.

Before Elon Musk’s purchase of Twitter, the platform fell into the FBI’s trap — or just carried out its own liberal bias — by banning users from sharing a story by reporter Miranda Devine in the New York Post, the nation’s oldest continuously published newspaper. Facebook also throttled the story’s reach.

That could have cost President Donald Trump votes in a tight race for re-election, according to a survey of people who voted for Biden in 2020 in seven swing states. The poll, conducted by the Media Research Council, found that if voters had known about the Hunter Biden laptop story, Biden could have lost 10 percent of his swing-state vote total, costing him the White House.

After social media — and a large group of intelligence agents — labeled the laptop “disinformation,” federal authorities confirmed the authenticity of the laptop’s files and revealed that they had a months-long investigation into Hunter Biden.

Those revelations only came after the election safely ended in Biden’s favor.

Now Evans is trying to rip the veil off the Hunter Biden files… but he’s not optimistic.

“FOIA has become a toothless vehicle. Courts do not comply with the spirit of the law, they’re more inclined to bend over backward to accept the government’s position rather than force disclosure,” he said.

That’s why he’s calling in Republican figures, who will be in the majority in the House of Representatives.

“I strongly support what Mr. Evans is doing with his FOIA request. And I think that will be evidence that we could use to determine whether or not Joe Biden is compromised,” Congressman Comer told Sean Hannity this week.

Comer compared the Biden administration’s stonewalling to “Watergate, Iran-Contra, or even many of the Clinton scandals”—all of which ended in real or threatened acts of impeachment.

“We know he lied about his family’s business schemes,” Comer claimed. “But what we need to know is if this administration is in fact compromised because of all the shady business dealings.”