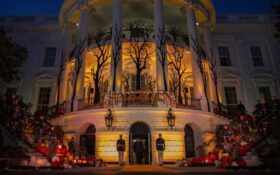 The Biden administration has decided the best way to fight drug addiction in red-state America is by giving addicts free drug paraphernalia—on your dime.

The Biden administration’s National Institutes of Health has authorized an experiment to put special vending machines in rural Kentucky that contain “free” syringes for people addicted to intravenous drug users, such as fentanyl and heroin.

The “harm reduction kiosks” have gone up throughout Appalachia—supposedly to help fight drug addiction.

But Biden health officials are not just handing out needles: The National Institute on Drug Abuse told the Washington Free Beacon that these specific vending machines will let drug addicts get “injection equipment, naloxone, fentanyl test strips, hygiene kits, condoms, and other supplies.”

Distributing drug equipment and condoms together: What could go wrong?

The machines offer other, unspecified “resources/guides.”

The Biden administration—which believes the best way to fight inflation is by spending trillions of dollars and which controls the border by handcuffing Border Patrol agents—thinks the way to combat drug overdose deaths is by handing out drug supplies to addicts and users.

Other government agencies that have gone down this road warn that it only makes things worse.

“Drug users receiving clean needles reported injecting themselves more frequently after the start of the program – from five times a day, on average, to nine times a day,” reported Indiana’s attorney general, Curtis Hill, after he surveyed several programs in his own state.

Maybe the reason Biden doesn’t care about—and is even encouraging—the deaths of these vulnerable American citizens is that these people never voted for him or his party, anyway. White, male, Kentuckians are as red as voters get. In rural Jackson County, Kentucky, Biden received only 10 percent of the vote! Trump won the county with 89 percent. Kentucky is the state that elected the Republican Senate leader, Mitch McConnell. The more Kentuckians who die, the better for Biden and his party.

Or it could be Biden’s confusion about drugs (and everything else) that drives his policy. Two weeks ago, he bragged that the Drug Enforcement Agency warned about prescription pills laced with fentanyl in its “One Pill Can Kill” campaign—but he’s deprioritized the Mexican border where the vast majority of fentanyl enters the United States even further.

Biden finally won the right in court to repeal Title 42, which lets Border Patrol agents expel illegal immigrants on the grounds that they might carry COVID-19.

Of course, the addicts aren’t the only ones to suffer under this program. Often, they shoot up right at the sight of the machine and leave their discarded needles on the grounds… often in a public park frequented by children.

“Trying to prevent the spread of disease among heroin users, Madison County (Indiana) officials for two years experimented with a needle “exchange” program. After observing negative consequences, they now have wisely backed away,” AG Hill wrote.

“It leaves thousands of needles on the streets, in our parks, and on our street corners and our parking lots and our community,” said Madison County Prosecutor Rodney Cummings. “It was just unacceptable.”

Hill said most addicts use these programs to get more needles, not to trade their old drug paraphernalia for new needles. “Most ‘needle exchange’ programs distribute far more needles than they collect,” he wrote.

Biden may be out of touch with reality, but the people really running his administration know these facts. They just wrote a speech where Biden called his political opponents “semi-fascists” who pose a threat to democracy.

Is this how they plan to take out the threat—one overdose at a time?