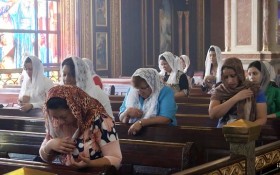 Four more Christians were tragically slaughtered by Islamic extremists in the Middle East early this week.

This time the target was the office of Wycliffe Associates, a Christian organization with locations throughout the globe whose main goal is to translate Bibles and conduct missionary work.

In a statement released by the organization, the charity organization announced that unnamed attackers stormed one of their offices, shooting everyone and everything they could, killing four and destroying much of their equipment.

“They shot and destroyed all the equipment in the office including the Print On Demand (POD) equipment. The invaders burned all the books and other translation materials in the office,” the statement read.

Two workers died of gunshot wounds, while two died protecting the lead translator. According to the group, the office leader was spared when “two other workers laid on top of the lead translator — saved his life — and died deflecting bludgeoning blows from the radicals’ spent weapons.”

Wycliffe Associates has promised to respond to the attacks by doubling their efforts.

“Pray for others to step up and take on the translation task,” the statement read. “Please ask the Lord to mend the hearts and wounds of the translation team who have gone through this horrible ordeal. Pray that God will strengthen their minds, their hearts, and their bodies to be able to continue the translation of the gospel for their people.”

The statement also asks for forgiveness for those who committed the terrible attack.