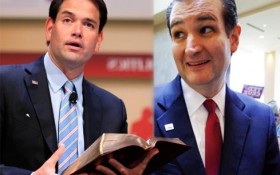 Texas Sen. Ted Cruz is facing increasing criticism regarding his honesty and campaign tactics, and his campaign’s latest screw-up could deal another blow to his White House hopes.

Cruz apologized for the incident, saying, “We are not a campaign that is going to question the faith of another candidate for president,” after the aide responsible, Rick Tyler, stepped down.

In the video, Rubio approaches Cruz’s father and a Cruz aide in a hotel lobby and compliments them for reading the Bible. He adds that the book of Proverbs is especially enlightening.

But the video distributed by Tyler fudged the audio transcript to make it appear like Rubio was insulting the Bible and saying it didn’t have many answers.

Rubio accepted the Cruz campaign’s apology but told reporters aboard his campaign plane on Monday night that Rick Tyler was simply “a fall guy” who was “executing a culture that exists in that campaign. The bigger issue is the culture that’s been created.”

Rubio continued, saying, “Right now Ted Cruz is in charge of his campaign. … And if his campaign has created a culture of misleading people and saying things that aren’t true and lies, he’s responsible for that.”

“At some point there has to be some level of accountability. Otherwise…you’re sending the message to the people who work for you: Go out and do anything you want and if you get caught we’ll just apologize, but we’ll keep doing it,” Rubio added.

It’s not the first time that Cruz’s campaign has been accused by rivals of using questionable tactics. Cruz apologized to GOP hopeful Ben Carson earlier this month after his campaign promoted a news story suggesting that Carson was getting out of the race. Cruz’s campaign has also acknowledged creating a website that used a computer program to create a fake picture of Rubio shaking hands with President Barack Obama.

“It’s every single day something comes out of the Cruz campaign that’s deceptive and untrue, and in this case goes after my faith,” Rubio said.

Fellow Republican presidential candidate Donald Trump even weighed in on the controversy on behalf of Rubio, lashing out at Cruz over Twitter on Monday. Trump said that Cruz “has now apologized to Marco Rubio and Ben Carson for fraud and dirty tricks. No wonder he has lost Evangelical support!”