Beware of this poison bug invading USA - The Horn News 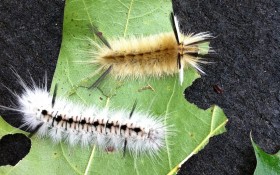 Be on the look-out for this foreign bug – this Canadian caterpillar now found in Pennsylvania can cause a nasty rash. It was cause several hours of discomfort in a stinging rash, but in most cases can be treated at home with lotion and ice.

WJAC-TV says there have been many recently reported cases in State College and elsewhere in central Pennsylvania.

The white hickory tussock moth caterpillar is to blame.

The caterpillar’s fuzzy black spines contain venom they use to ward off predators. But it can also irritate human skin.

State College resident Bryant Martin says he and his 5-year-old son learned that the hard way. The boy was letting the caterpillar crawl on his hand Sunday and developed a rash minutes later.

MedExpress Dr. Joseph Betz says the rash is only temporary.