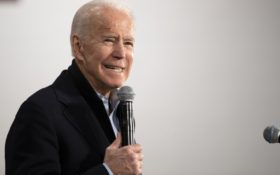 Slow-counting government officials have yet to finish tallying up all the votes from the 2022 midterms, but the 2024 presidential race is already unofficially underway — and it just brought terrible news for President Joe Biden.

The smart money says that if you had to lay money on the next election, you wouldn’t place it on him, or his veep.

That’s not an estimate: That’s the official word from the best odds-makers in the gambling industry.

According to the people who make their living knowing when to hold ‘em and when to fold ‘em, the incumbent president has officially become the third most likely candidate to be elected in a little under two years from now.

Thanks to the midterm elections, Florida Governor Ron DeSantis now holds the top spot as the betting man’s pick to win the 2024 race.

DeSantis has roughly a one in three chance of becoming the next president of the United States, the odds-makers say.

That puts him ahead of Donald Trump, who now has a one in four chance of becoming a modern-day Grover Cleveland and serving two non-consecutive terms in the White House.

Meanwhile, Joe Biden has less than half the chance of DeSantis, at 15 percent—or a one in 6.66.

That’s a huge flop for Biden, and even worse news for Vice President Kamala Harris who once topped the survey.

“Shortly after the inauguration” in 2021, “Vice President Kamala Harris was atop the presidential odds board,” the website notes, “with Biden close behind.”

“Those odds have shifted massively, with DeSantis seemingly coming out of nowhere to lead the field,” says the estimate comes from Covers.com — and they’re not just figuring.

“Covers.com is an unrivaled source for sports betting information,” says one source. “Covers.com personalities are some of the most connected insiders in the gaming industry, with their fingers on the global pulse of sports gaming,” including in the world of “politics.”

In other words, they don’t have a political axe to grind: It’s just business to them…and business is booming in Tallahassee.

It’s small wonder DeSantis has catapulted to the top of the polls: He beat his opponent, RINO retread Charlie Crist, like a drum. DeSantis piled up a 20-point victory, winning in areas and among demographics that no Republican—including Crist, who ran as a Democrat this time—has ever won.

His accomplishment has caused some figures in the GOP, who were always a little skittish about Trump, to turn their back on the ex-president completely.

“The voters have spoken and they have said that they want a different leader,” said Virginia’s Lieutenant Governor Winsome Sears, a Republican. (Of course, Trump was not on the ballot, and he still commands the largest following in most Republican primary polls.)

But after DeSantis’ unprecedented showing, Trump has definitely gotten the message that DeSantis is passing him up on the road to the White House—and it’s touched off a rivalry between the two conservatives.

“Now that the Election in Florida is over, and everything went quite well, shouldn’t it be said that in 2020, I got 1.1 Million more votes in Florida than Ron D got this year, 5.7 Million to 4.6 Million?” Trump opened up. “Just asking?”

Trump repeated his nickname of “Governor Ron DeSanctimonious” before tearing into his governor-rival. Trump called DeSantis “an average REPUBLICAN Governor with great Public Relations, who didn’t have to close up his State, but did, unlike other Republican Governors.” (Of course, DeSantis took a huge media hit when he reopened his state long before most other governors—and certainly before Trump’s handpicked COVID “expert,” Dr. Anthony Fauci, gave the all-clear. We’re still waiting for that.)

Trump said DeSantis’ “overall numbers for a Republican, were just average—middle of the pack—including COVID.” He also said that an average of 850 people a day are moving to Florida, because DeSantis “has the advantage of SUNSHINE.”

Trump has launched an all-out battle against DeSantis, just as he did against Jeb Bush in 2016—but he may have bet wrong this year.

Trump’s gamble worked in 2016, because grassroots Republican voters hated “Jeb!”—and vice-versa. They had just had two dull, lifeless, unelectable candidates forced down their throats in 2008 (John McCain) and 2012 (Mitt Romney). They were ready for someone to go whole-hog against the Republican Party’s anointed leader.

But Republicans like Ron DeSantis. In some polls, more than they like Trump. A scorched earth campaign isn’t going to land the same way as it did eight years ago.

The wind is at DeSantis’ back between here and 2024.

Two years is an eternity in politics, and the landscape could shift back to Trump, Biden, or even (God forbid) Kamala Harris. But at the moment, DeSantis has every reason to roll the dice with a 2024 presidential bid.

If he keeps having political breakthroughs like he did this week, you can bet he will.