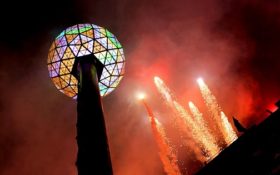 2016 is coming to a close and Americans everywhere are scrambling to decide how they will spend the final seconds of this year.

We’ve gathered five of the best and most popular New Year’s celebrations America has to offer, to make it easier for you to decide how you want to ring in 2017!

There’s no place like Times Square New York to celebrate New Year’s. Americans from coast to coast tune in to watch the ball drop on television, so imagine the magic of being right in the action! There will be incredible performances by Gavin Degraw, Silento, Mariah Carey and Rachel Platten leading up to the 60-second countdown before midnight. A whopping three thousand pounds of confetti will be launched above the crowd, creating an unforgettable New Years’ experience.

If you’re spending New Year’s Eve with the little ones, this event can’t be beat. An earlier countdown at 6 p.m. recreates the Times Square ball drop with a giant Lego dropping 22 feet in the air. Kids will have the chance to meet some of the stars from the Lego Movie, see multiple shows, and listen to live music all day!

While it’s too early for Mardi Gras, New Orleans is bustling on New Year’s Eve. In space of a ball drop traditionally associated with Times Square, the Big Easy has their own fleur-de-lis drop, this year hosted by actress Lucy Hale in front of Jax Brewery. If you’re traveling with kids, don’t worry. New Orleans offers fun activities for the whole family. Audubon Zoo hosts its own celebration from 10:30 a.m. to 1:30 p.m. on New Year’s Eve. The Louisiana Children’s Museum also hosts a party with music and arts and crafts to entertain the children.

The Navy Pier in Chicago offers one of the most spectacular fireworks shows America has to offer this year. Sponsored by Miller Lite and Jewel-Osco, the show begins at the first strike of midnight of the New Year. If you’re looking for an extra special celebration, there are multiple cruises from which to watch the fireworks for a more luxurious setting.

Where better to celebrate the New Year than the most magical place on earth? The Magic Kingdom at Walt Disney World hosts one of the most spectacular events for families and adults alike. There’s incredible light shows, performers and a pageant to make this celebration one you will never forget. Beginning at 8 p.m. on New Year’s Eve, guests enjoy drinks, fine cuisine and performances by music groups and incredible DJs. For the finale, Disney puts on one of the best fireworks shows in the nation titled, “Fantasy in the Sky.”

Whether you attend one of these spectacular events or spend the night at home, it’s the people you surround yourself with that will truly make the night special.

From all of us at The Horn News, Happy New Year!