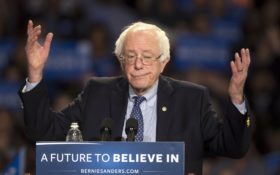 He was once Joe Biden’s fiercest rival on the campaign trail.

According to reports from Politico, the Democratic socialist leader is gunning for a job in the White House should Biden be elected in November. Rumors have also said Bidens cabinet could be very politically diverse, including hyper liberals such as Rep. Alexandria Ocasio-Cortez, D-N.Y., and “Never Trump” Republicans like former Sen. Jeff Flake, R-Az.

As for Sanders, he is reportedly gunning for a Secretary of Labor appointment.

His former campaign boss told the media “it would be great to have a unity government that takes into account that progressives are a pretty healthy portion of the electorate.”

However, not everyone is convinced.

Sanders is very unpopular among Capitol Hill politicians and notorious for being hard to get along with, even among Democrats. Hillary Clinton once said that “nobody likes him.”

Additionally, an anonymous source close to Sanders claimed there was no chance of him accepting a position on a hypothetical Biden White House team.

He’s a “Lone Ranger,” he remarked.

And a move to the White House cabinet would be a blow to Demorats desperate to control the senate. Fox News notes that the potential move would allow Vermont’s Republican Gov. Phil Scott to fill Sanders seat with a GOP candidate.