Bernie Sanders: Give Obamacare to illegals! - The Horn News 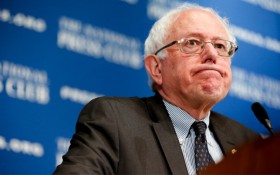 Presidential candidate Bernie Sanders, the Vermont Senator who describes himself as a socialist, has been caught in a desperate game of One-upmanship with his rival for the Democratic nomination, former Secretary of State Hillary Clinton.

Both candidates are scrambling for support of Latino voters, and Thursday Sanders came forward with a controversial plan. He announced his support for extending Obamacare to illegal immigrants and undocumented workers.

Sanders made the promise of support during his 45-minute sit down with the Congressional Hispanic Caucus, attendees reported.

Both Sanders and Clinton are in a dead heat in primary states Iowa and New Hampshire, and are rabidly courting the votes of the Hispanic population to put them over the top during “Super Tuesday.”

The so-called Super Tuesday states and other contests in March could play a more prominent role in a competitive primary between Clinton and Sanders and, potentially, Vice President Joe Biden. Sanders has erased Clinton’s early advantage in Iowa and New Hampshire, setting the stage for a drawn-out primary.

Not to be outdone, Clinton’s campaign is planning a major push to organize Latino voters ahead of the Nevada caucuses and early primary contests in Texas, Florida and Colorado, all with an eye toward connecting with Hispanics in the 2016 election.

No word on how much Sanders newest promise will cost, but the sum total of his promised payouts by mid-September had already reached a staggering $18 trillion price tag.