Bernie Sanders: You bet I’m coming for your guns - The Horn News 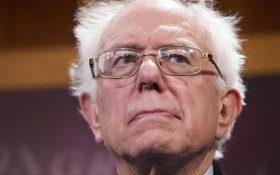 During a Sunday appearance on NBC’s “Meet the Press,” Vermont Sen. Bernie Sanders made clear that he doesn’t believe Americans have the right to own guns for self defense.

And if you do own one, he’s planning to come for it as president.

Sanders took his long-standing opposition to the Second Amendment to the next level during the interview, when he said he believes in a ban for all guns not exclusively used for hunting.

“Nobody should have a gun who has a criminal background, who’s involved in domestic abuse situations. People should not have guns who are going to hurt other people, who are unstable,” said the Vermont socialist to host Chuck Todd.

Sanders continued, “And second of all, I believe that we need to make sure that certain types of guns used to kill people, exclusively, not for hunting, they should not be sold in the United States of America, and we have a huge loophole now with gun shows that should be eliminated.”

In essence, Sanders was calling for a complete ban on hand guns in the United States.

You can view the video of Sanders’ appearance below: