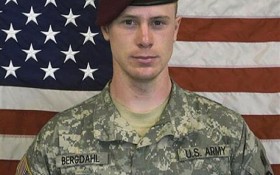 Army Sgt. Bowe Bergdahl will face charges of desertion and misbehavior before the enemy in a general court-martial, instead of a misdemeanor-level forum, the Army announced Monday. A conviction could result in a life sentence for the accused deserter.

Bergdahl was held prisoner by the Taliban for five years and freed in exchange for five alleged terrorists being held in Guantanamo Bay by the Obama administration, a controversial deal many conservative lawmakers have since denounced as unethical or even illegal.

Bergdahl’s attorney, Eugene Fidell, said the convening authority — a high-ranking officer charged with deciding whether evidence warrants a court-martial — did not follow the advice of a preliminary hearing officer when he upgraded the charges.

Lt. Col. Mark Visger had previously recommended that Sgt. Bergdahl’s case be referred to a special court martial, which is a misdemeanor-level forum. That limits the maximum punishment to reduction in rank, a bad-conduct discharge and a term of up to a year in prison.

Bergdahl, of Hailey, Idaho, walked off his post in eastern Afghanistan’s Paktika province on June 30, 2009, and was captured by the Taliban and held for nearly five years.

The U.S. Army Forces Command charged the 29-year-old Bergdahl on March 25 with “desertion with intent to shirk important or hazardous duty” and “misbehavior before the enemy by endangering the safety of a command, unit or place.”

Separately, Fidell, a military justice expert who is also a visiting lecturer at Yale Law School, complained about political figures who have made derogatory statements about Bergdahl.

Fidell previously has complained about Trump calling Bergdahl a traitor.

A date for an arraignment hearing at Fort Bragg, N.C., will be announced later.