The next liberal target: Benjamin Franklin - The Horn News 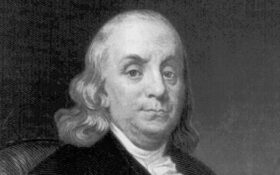 The city of Washington is a living monument to American history.

But that could change under a new plan to give the nation’s capital a politically correct makeover to appeal to the left.

Statues, monuments and memorials to some of the country’s most important figures — including those Benjamin Franklin — could get torn down or redesigned in the name of making them more inclusive.

And no one will escape the PC microscope, not even George Washington himself, who can’t past muster in the city named for him due to the fact that he was also a slave owner.

A new report issued by a D.C. committee charged with looking into the city’s memories declares that any blemish on someone’s record – no matter what they’ve contributed to the nation as a whole – disqualifies them from being honored.

“Our decision-making prism focused on key disqualifying histories, including participation in slavery, systemic racism, mistreatment of, or actions that suppressed equality for, persons of color, women and LGBTQ communities and violation of the DC Human Right Act,” the report notes.

One target is the statue of President Andrew Jackson in Lafayette Square.

Over the summer, anarchists tried to tear down the statue by force. Now, they could get their way with the official blessing of the city.

Jackson is a controversial figure with a mixed legacy. President Abraham Lincoln, on the other hand, is beloved across the political spectrum.

Yet the report also targets the Emancipation Memorial, which shows Lincoln standing above a freed slave — paid for by the very slaves he helped free.

“In all instances we believe strongly that all District of Columbia owned public spaces, facilities and commemorative works should only honor those individuals who exemplified those values such as equity, opportunity and diversity that DC residents hold dear,” the report states.

The group even created a “red list” of names that “gave us pause,” committee co-chair Richard Reyes-Gavilan, who is also executive director of DC Public Library, told The Washingtonian website.

Those names include some of the most towering figures in American history: Thomas Jefferson, Benjamin Franklin, Francis Scott Key, and Alexander Graham Bell could be removed from schools, parks, and other public facilities.

But at the heart of the report is a call to “remove, relocate, or contextualize” eight of the city’s most famous memorials including the Jefferson Memorial, a statue of Benjamin Franklin and even the Washington Monument itself.

Obviously, no one is going to remove or relocate something as big as the Washington Monument.

But the move to “contextualize” would almost certainly mean adding new signage, exhibits and other features that would knock the “Father of Our Country” off of his metaphorical pedestal.

Those smaller statues – such as Franklin and Jackson – could be knocked off their literal pedestals.

This is not parody…

Hey D.C.—they’re not your monuments to rename or remove.

“Not on my watch,” wrote Interior Secretary David Bernhardt. “Never going to happen.”

Indeed, two things could stand in the group’s way.

First, while many schools and such could easily be renamed to remove honors from “problematic” figures, most of the biggest and best-known monuments, statues and memorials are on federal land.

It would take an act of Congress to have them removed.

And second, there’s public opinion, which is firmly against removing statues of historical figures and other monuments – and that’s not a party-line issue.

One survey this summer found that while Americans are divided almost equally on the issue of removing Confederate memorials, there’s no such division when it comes to tributes to the nation’s Founding Fathers.

That includes majorities of Democrats, pollster Scott Rasmussen wrote on the Just The News website.

In fact, 57 percent of Americans who oppose President Donald Trump are against removing monuments to George Washington… showing that in a nation more polarized than ever, there are still some issues most people can agree on.