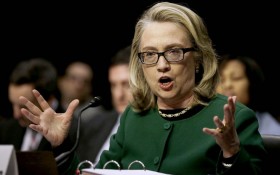 The distraught mother of Benghazi victim Sean Smith, one of the four Americans killed at the US consulate in Libya in 2012, gave an impassioned plea to the American public about former Secretary of State Hillary Clinton yesterday – Don’t believe Clinton’s lies!

“She’s lying. She’s absolutely lying,” Smith said in response to Clinton’s assertion that she has been transparent about what happened in Benghazi.

Smith also said Clinton and the State Department have withheld vital information from victims’ families over the past three years.

Clinton is appearing before the House committee investigating her role in the tragic killings.

Earlier this week, it was revealed that then-Ambassador Chris Stevens sent a request to the Clinton-run State Department before the attack, asking for more security and saying that the consulate’s current guard wasn’t meeting minimum standards.

In the message cable, Stevens said that, “Overall security conditions continue to be unpredictable, with large numbers of armed groups and individuals not under control of the central government, and frequent clashes in Tripoli and other major population centers.”

Stevens went on to say that the current security wasn’t meeting the minimums to guarantee “transportation security and incident response capability.”

According to reports, a deputy of Clinton flatly rejected the request, a revelation that could spell trouble for the Clinton camp.