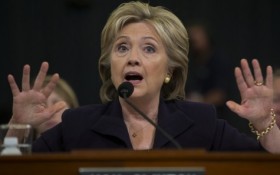 The final batch of emails from former Secretary of State Hillary Clinton’s private server was released by the State Department yesterday — and they included a long-rumored email proving that Clinton was well aware of the deteriorating security situation in Benghazi, Libya.

And it appears that she did almost nothing to prevent the tragedy.

On April 10, 2011, ambassador Chris Stevens’ aides sent a notification to Clinton’s administration that the ambassador was seriously considering fleeing the country in a rapidly escalating civil war — seventeen months before the deadly Benghazi attacks that saw Islamic militants storm the U.S. consulate and killed Stevens.

The safety concerns of the ambassador were sent to several of Clinton’s inner circle, including her right-hand aide Huma Abedin and now-top foreign policy adviser to the Clinton campaign Jake Sullivan in an email titled, “Stevens update.”

Those aides also forwarded the email directly to Clinton.

The email reads, in part, “The situation in Ajdabiyah [90 miles south of the consulate] has worsened to the point where Stevens is considering departure from Benghazi. The envoy’s delegation is currently doing a phased checkout (paying the hotel bills, moving some comms to the boat, etc),” and that Stevens “will wait 2-3 more hours, then revisit the decision on departure.”

It goes on to tell of heavy shelling and sniper fire. Aide Timothy Davis, author of the email, wrote that Stevens was weighing if the situation was irreversible, saying that he was aware “departure would send a significant political signal.”

While Clinton was forwarded the email, it’s not clear that she ever responded. And critics have long alleged that she did too little to protect Stevens and the other members of the diplomatic outpost.

The Benghazi email, which had previously been subject to a leak and was rumored to have existed for months, was confirmed in yesterday’s final release of 3,800 document stored on Clinton’s private server.

And while the release may have come too late to stop Clinton from wrapping up the Democratic nomination for president, it will certainly be used as ammunition in the general election.

The release brought Clinton’s email total to more than 52,000, including 2,100 that were censored or withheld completely for containing information now deemed classified, with 22 such emails deemed “top secret.”

In addition to portions of that document being censored, one email between Clinton and President Barack Obama was also withheld from publication on Monday, bringing to 19 the total of such messages that have been kept private to protect the president’s ability to receive advice from his aides.