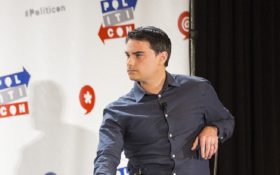 Shapiro acknowledged that he is supportive of high school student walking out to protest school safety… but he does not approve of the mainstream media using the march for their own political agenda.

The mainstream media has portrayed all marchers as activists for gun control — and Shapiro believes that these students are being used as “political human shields.”

MacCallum began the segment by playing a clip from Wednesday’s march, If you can speak, speak. If you can march, march.” and “I ask our Republican lawmakers: Is their right to have a gun more important than our right to live?” and “We will not sit in classrooms with armed teachers!”

“But not all students are on board with that message,” MacCallum noted, mentioning an email sent to Shapiro, saying, “I am in favor of walking to honor the victims, but not in favor of promoting gun reform. I feel like I have to choose between going against my political values or looking like a bad person. I need help. What do I do?”

Shapiro said he responded to several messages from students asking for help by stating, “What I’ve suggested is walk out with your friends and hold up signs that say things like, “Standing with children, standing with the Second Amendment,” or “Protect our lives, arm law-abiding people.”

MacCallum mentioned that a gun store owner in Florida, who is a former member of the Israeli military, refuses to sell guns to anyone under the age of 21. “Is there any room for some of these measures that some of these kids would be in favor of?” she asked.

“It depends on the measure. And the question is: what’s the level of public support? Whenever they take a poll, and they say there are tons and tons of people who are in favor of gun control, that’s a really big statement; it’s like polls that that show Americans are in favor of cutting the size of government,” he responded.

He continued, “These are arguments that we can have, and I’m perfectly happy to have them. What I’m not happy to do, and I think a lot of these students who are writing me are not happy about, is this attitude that if you disagree with people on politics that this means that you can’t even be part of the conversation, that the only people we will talk to are people we agree with on gun control measures. ”

Someone should let liberals know that discussion and open dialogue is what will create a resolution to put an end to these violent shootings — and all opinions must be shared!