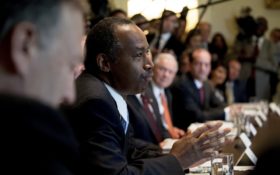 Atheist groups complained the words in Carson’s prayer infringed on the separation of church and state.

Prayers during Trump’s Cabinet meetings are not new, nor is his administration the first to do so: former President George W. Bush also opened Cabinet meetings with prayer, and former President Barack Obama’s administration supported a New York town’s bid to begin local meetings with Christian prayers during a legal battle that culminated with a 2014 Supreme Court decision in its favor.

“It doesn’t mean that they cannot work together to promote godly principles,” Carson added. He lauded Trump for “great courage in (the) face of constant criticism.”

Rachel Laser, president of the atheist group Americans United for Separation of Church and State, said in a statement that Carson’s commentary “is hypocritical and does a disservice to this constitutional principle.”

“Church-state separation means that all Americans have the right to believe or not, as long as they don’t harm others,” Laser added. “This administration’s policies and rhetoric, by contrast, privilege a narrow set of religious views above all others.”

Carson, a member of the Seventh Day Adventist church, has a history of pushing back at the separation of church and state. He did so during his GOP presidential primary campaign in 2016, when he touted the nation’s “Judeo-Christian foundation” to one Iowa voter.

“The Secretary’s heartfelt prayer speaks for itself. He simply used prayer to emphasize the value of every American, the need for civility, and the importance of morality. It is saddening some people would try to skew his genuine words into anything other than the contrary,” said HUD spokeswoman Caroline Vanvick.

Carson’s wording in Monday’s prayer also raised alarm bells among liberals because they came 10 days after both Secretary of State Mike Pompeo and Attorney General Bill Barr delivered public speeches touting the influence of their Christian faiths. In his remarks in Nashville, Pompeo discussed consulting the Bible he keeps on his desk as often as possible, while Barr’s remarks at the University of Notre Dame attributed to the framers of the Constitution a “belief that religion was indispensable to sustaining our free system of government.”

Laser said that taken together, prayers, the statements about separation of church and state, and the administration’s actions are cause for concern.

She added: “Prayers at government meetings send a message that this administration favors people of faith, and Christians in particular.”

Here’s the video of Carson’s prayer that caused outrage.

Warning: Atheists will find this offense.

"We thank You for President Trump who also exhibits great courage in face of constant criticism. We ask You give him strength to endure & wisdom to lead and to recognize You as the sovereign of the universe, with solution to everything" pic.twitter.com/B6GNWA7IUD