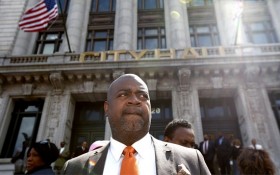 An anti-violence demonstration in Newark, New Jersey, devolved into a physical altercation between two activists.

NJ.com reports the small crowd began arguing on the steps of Newark City Hall last week about the city’s attempts to curb violence.

The demonstration was organized by two anti-violence groups.

They say they wanted to urge Mayor Ras Baraka to put his “quality of life plan” into action to help address violence in the city. A group of Baraka supporters appeared and an argument ensued.

At one point, one man put his hands around another’s neck and pushed him to the ground.

Organizers and other participants said the skirmish lasted only a few minutes, and there were no serious injuries.

Baraka says the scuffle is being investigated by Newark police and called it “disheartening.”