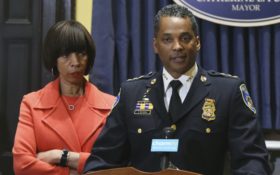 “My decision is because I’m inpatient,” Pugh said at a news conference. “My decision is based on the fact that we need to get these numbers down. … I’m looking for new and creative, innovative ways to change what we’re seeing here every day.”

Violent crime rates in Baltimore have been notoriously high for decades and the city has recently been dealing with increasing homicides. Baltimore ended 2017 with 343 killings, bringing the annual homicide rate to its highest ever — roughly 56 killings per 100,000 people. Baltimore, which has shrunk over decades, currently has about 615,000 inhabitants.

DeSousa, a 53-year-old city resident who joined the department in 1988, pledged to fight violent crime by putting more officers on the streets, an effort he said is already underway. Additional uniformed officers began rolling out at 9 a.m. as part of a new initiative, he said at the news conference.

DeSousa said he had a message for the violent repeat offenders, the “trigger pullers” who “plague the city.”

“We’re coming after them,” he said.

DeSousa has served in a variety of roles over the years and in 2017 was assigned to lead the patrol bureau, the largest in the department. His appointment will be made permanent following “appropriate approvals,” Pugh’s office said in a news release.

City Council President Bernard C. “Jack” Young said in a statement that he stands behind the mayor’s decision and believes DeSousa’s appointment “will be greeted warmly throughout the police department and the City of Baltimore.”

Davis was sworn in as commissioner in October 2015 after serving on an interim basis for several months. He replaced Anthony Batts, who was fired after homicides spiked following the death of Freddie Gray, a black man whose fatal spinal cord injury in police custody triggered massive protests that year and the city’s worst riots in decades.

Prior to 2015, Baltimore’s killings had generally been on the decline.

In a statement, Pugh — who took office as mayor in December 2016 and has pledged to reduce crime, boost police recruits, and improve long-neglected neighborhoods — thanked Davis for his leadership.

“I am grateful to Commissioner Davis for all that he has done to implement the initiatives underway to address violent crime at it root causes,” she said.