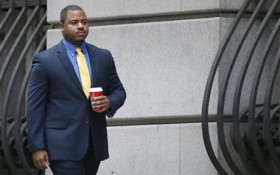 Prosecutors say it would have taken just two clicks for Baltimore Police Officer William Porter to save Freddie Gray’s life: one click to buckle him into the back of a transport van and another click of his police radio to call for medical help. Porter’s lawyers say he’s not to blame for Gray’s death, which has roiled Baltimore for months.

Gray died April 19, a week after his neck was broken while he was in the back of a police van with his wrists and ankles shackled.

Jurors will have to determine who they believe most: the prosecutors who say Porter is an indifferent cop and criminally responsible for Gray’s fatal spinal injury, or the defense attorneys’ characterization that he is a falsely accused police officer who asked after Gray and told his supervisors to bring the man to the hospital.

Prosecutors have had to prove criminality by inaction.

His defense countered that the case is based on conjecture, and there is no evidence Porter caused Gray’s death.

Porter testified that Gray showed no signs of pain or distress before he arrived at the police station critically injured.

Prosecutors said this was a blatant lie.

“Freddie Gray went into the van healthy and he came out of the van dead,” prosecutor Janice Bledsoe reminded jurors.

The transport van “became his casket on wheels” after Porter repeatedly denied Gray medical care and left him handcuffed and shackled but unbuckled, Bledsoe said.

Gray was arrested while fleeing police in his neighborhood, just seven city blocks from the station, yet police stopped the van repeatedly during a circuitous trip around West Baltimore that stretched on for 45 minutes.

“Click,” she said, and then repeated. “How long does that take, to click a seat belt and click a radio and ask for a medic? Is two, three, four seconds worth a life? It’s all it would have taken.”

Bledsoe showed jurors the unfastened seat belt from the transport wagon. “It’s got Gray’s blood on it,” she said.

“Don’t fall for that,” countered Porter’s attorney Joseph Murtha. He argued that expert witnesses disagreed on exactly when Gray’s neck was broken during his trip to the police station, and said this alone should give jurors reasonable doubt.

Gray’s death was indeed a “horrific tragedy” but “there is literally no evidence” Porter is responsible, he said. “This case is based on rush to judgment and fear. What’s an acronym for fear? False evidence appears real.”