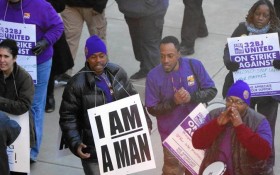 Just days after ISIS threatened to launch attacks on the United States — and less than a month after the group used an improvised bomb to blow up a Russian jetliner — a group of American airline employees has decided to strike for more money.

More than 2,000 baggage handlers and other service workers, who in many ways are a first line of defense for preventing terror attacks, have announced they’re on strike at major airports across the country, demanding a higher wage and more lucrative benefits.

The workers are being organized by the Service Employees International Union, which is coordinating the strike and protests nationwide.

Strikes by the union are being organized at airports in Boston, Chicago, New York, Philadelphia, Newark, New Jersey and Fort Lauderdale, Florida.

The notion of striking or disgruntled airline workers is especially troubling heading into the busy Thanksgiving travel week.

American Airlines, which has the most flights at the Philadelphia airport, says it’s hoping the strike won’t disrupt passengers’ travel plans or safety. A JetBlue spokesperson said the company is working “with our partners to ensure there are no flight interruptions.”