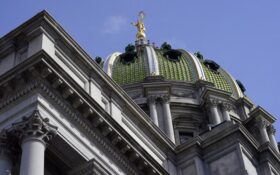 In the last two presidential elections, almost no state has been more important than Pennsylvania.

In 2016, Donald Trump shocked the world by becoming the first Republican presidential candidate to carry the deep-blue state since George H.W. Bush’s 1988 landslide.

Four years later, Joe Biden played up his boyhood ties to Scranton, and an assist from the state Supreme Court, to come out ahead in the vote tally.

And again this year, the nation turned its attention to Pennsylvania as it held major elections for the U.S. Senate (where John Fetterman beat Dr. Mehmet Oz) and governor (where Josh Shapiro defeated conservative Republican Doug Mastriano).

Those elections went to the Democrats—but the Left has already fallen on hard times. Its crimes are so bad that it can’t cover them up anymore.

Even Democratic candidates are striking out at them…and their most radical left-wing politicians could be on the brink of going down.

Josh Shapiro won the governor’s race, but he’s still attorney general—and he had to charge a fellow Democrat with election fraud.

Shapiro threw the book at Rasheen Crews, who’s generally described by the media as a “Philadelphia political consultant”–which, according to authorities, is as sleazy as it sounds.

Crews reportedly worked for candidates who wanted to get on the ballot in the state Democratic primary. Once he got the money, instead of canvassing door to door to get the approval of his fellow citizens, he’d simply call in a group of people to forge registered voters’ signatures on the petitions.

One of Crews’ candidates actually gave the game away. The candidate said in an affidavit that he had given Crews petitions that had already been signed, but when he got them back, “two of the pages had names added to the petitions, after the pages were notarized.”

“Interfering with the integrity of our elections is a serious crime,” the Democrat said of his fellow Democrat. “My office is dedicated to upholding the integrity of the election process across the Commonwealth, to ensure everyone can participate in Pennsylvania’s future.”

No word on whether Shapiro is upset because of the integrity of the election, or because Crews is tampering in the Democratic primary, against Shapiro’s allies.

Either way, this definitely is not the first allegation of voter fraud in the city. Over the summer, former Democratic U.S. Congressman “Ozzie” Myers entered a guilty plea to stuffing ballot boxes for his party. Republicans in Venango County have complained about irregularities with voting machines for multiple elections.

And there were the overnight vote-counting shenanigans in 2020—especially in Philadelphia, which resembles a war zone thanks to the Larry Krasner, the soft-on-crime, Soros-funded district attorney who has been a light touch on crime his entire tenure in office.

Like voters in San Francisco and Los Angeles, Philadelphians have had their fill and finally impeached D.A. Krasner last week.

The Pennsylvania state House of Representatives voted 107-85 last Wednesday to put the district attorney on the witness stand and answer for himself.

Krasner is playing the victim, saying the GOP targeted him in a witch hunt. “In the hundreds of years the Commonwealth has existed, this is the only time the House has used the drastic remedy of impeachment of an elected official because they do not like their ideas.” he said in a statement. “Those ideas are precisely why Philadelphia voters elected and re-elected me to serve as the Philly DA.”

Republicans control both houses of the state legislature in Harrisburg…but they would need a two-thirds vote of the Senate to throw Krasner out of office. The GOP’s lead next year will be 28 seats to 22 for the Democrats…but Krasner’s record may be bad enough to convince several of his own party members to throw him out on his ear.

There had been 992 homicides on the city’s streets over the last 21.5 months. That’s nearly double the rate from 2015-2016, before Krasner took office.

In Philadelphia, murders hit a record high level of 561 in 2021. In fact, the “Philadelphia police submitted only nine months’ worth of 2021 crime data to the FBI,” according to Axios, to cover up just how bad Krasner’s record was.

One of Krasner’s victims Police Cpl. James O’Connor IV, who was shot by a career crook named Hassan Elliott, while trying to serve a with a warrant. As The Horn reported, a U.S. attorney called O’Connor’s death “the direct result of Philadelphia District Attorney Larry Krasner’s pro-violent-defendant policies.”

His own representatives want him out. “No public official is above accountability,” said State Rep. Martina White, a Republican who represents the Philadelphia area.

If any good news has come out of the 2022 midterm elections, it’s that the worst offenders are finally facing investigation—and maybe justice—in the Keystone State.