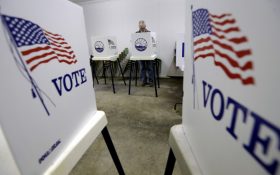 The government has released explosive new evidence that the nation’s electronic vote-counting machines were vulnerable to being – or they may even have been – hacked. But a Democrat has sat on the report for months.

In April, one of the top U.S. manufacturers of electronic voting machines admitted that it had installed a program that let people access its election management machines remotely.

Election Systems & Softwares, or ES&S, admitted that it installed the program “pcAnywhere” on the machines it sold to counties across the country for 6 years.

Election management machines aren’t voting machines – they’re the machines that program the machines you use in the voting booth.

They also count tabulate the final vote totals – so they decide elections.

The program pcAnywhere is supposed to let people fix problems on another computer from home… but it also could have given hackers the ability to change vote totals in multiple elections.

ES&S admitted that it “provided pcAnywhere remote connection software…to a small number of customers between 2000 and 2006” in a letter to Democratic Senator Ron Wyden of Oregon.

That’s a huge problem for honest elections – for at least two reasons.

First, sometime in 2006, hackers managed to obtain pcAnywhere’s source code and came up with a way to use pcAnywhere to log onto computers – like ES&S election management machines – remotely, without having to sign in with a password.

Even though this put the honesty of multiple elections in question, the company that sells pcAnywhere (Symantec) kept the security breach secret until January 2012.

An elections expert, Joseph Lorenzo Hall of the Center for Democracy and Technology, told Vice News that “a non-trivial number” of ES&S machines may have been exposed to hackers.

And that’s just the one company – but ES&S wasn’t the only one to put electronic votes up for grabs.

But election software experts say there’s no doubt that every single one of these companies installed the same security-destroying software on their machines.

“Certainly, (Diebold Election Systems) did the same, and I’d assume the others did, too,” said Douglas Jones, professor of computer science at the University of Iowa.

As a matter of fact, the Diebold company required purchasers to put in a backdoor. “Many of their contracts with customers included the requirement of a remote-login port allowing (Diebold) to have remote access to the customer system in order to allow customer support,” Jones said.

The fact is that votes may have been changed as a result of this massive security breach – and nobody is talking about it.

One of the counties that had an ES&S machine equipped with pcAnywhere was Venango County, Pennsylvania. Venango is growing more and more Republican in a state that used to favor Democrats.

But then strange things started happening in its elections.

“It started with an election in 2008 when the machines were basically showing a large number of undervotes,” said Craig Adams, a Republican who was on the county’s Board of Elections.

He said some candidates received “zero votes, but there was like 250 or 260 undervotes” – votes people cast for them but that were never counted.

Things got worse in 2011. That’s when the county’s voting machines started “flipping” votes. People would vote for one candidate but their votes would count for a different candidate.

Since the county had no paper backup, the fraud was only stopped if a voter happened to catch the mistake before casting a final ballot.

Venango County was still using pcAnywhere on its ES&S election-management system at the time.

ES&S gave hackers the ability to affect the presidential elections in 2008 and possibly 2012.

If you remember who won those elections, it may explain why Wyden was in no rush to release his findings.

Paper ballots take longer to count, but they’re much harder to hack – and American elections should be above all doubt.