Back on top! Trump cruises to easy primary victory - The Horn News 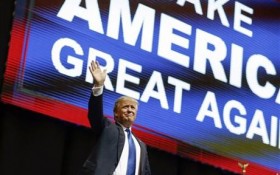 The current and former chiefs of the New Hampshire Republican Party condemned him. New Hampshire’s only two Republican members of Congress refused to endorse him. The conservative owner of the state’s largest newspaper called him “a con man” on the front page.

And the size of his victory could cost three GOP candidates — New Jersey Gov. Chris Christie, Dr. Ben Carson, and businesswoman Carly Fiorina — any last hope of staying in the race.

Trump’s 18-point win was also a reminder of the limits of party power in an age of anger toward Washington and frustration with politics.

Many Republican Party leaders may be terrified by Trump’s ascendance, but have yet to divine a way to stop the billionaire real estate mogul.

On Tuesday, establishment Republicans from New Hampshire expressed frustration that it was their state that delivered Trump’s first victory. “I refuse to support him under any circumstance,” said Fergus Cullen, a former New Hampshire Republican Party chairman. “Trump would be a disaster.”

But unlike Buchanan, Trump also enjoys a solid lead in national polls and is commanding big crowds at rallies. And his huge win in New Hampshire resulted in underwhelming performances by Christie, Fioina, and Carson, who had high hopes in the state but now appear finished.

In other words, the herd continues to thin — and Trump keeps coming out on top.

Competing for the support of the same group of mainstream Republicans, Ohio Gov. John Kasich, former Florida Gov. Jeb Bush and Christie and Rubio won enough votes combined to handily beat Trump. But as they fought among themselves — four political insiders against the lone outsider — Trump won with ease.

And now lays South Carolina, Nevada and the more than a dozen states that vote on March 1 — time that Trump, and Sen. Ted Cruz, can use to further their edge over these establishment candidates. Despite questions about the strength of his ground game, Trump continues to hold a commanding lead in many preference polls in the South’s first primary — and he could get a bump from his New Hampshire success.

When Trump gets to South Carolina on Wednesday, he isn’t likely to find any GOP leaders in the Palmetto State who are eager to embrace his campaign.

The state’s senior Republican senator, Lindsey Graham, has said that choosing between Trump and Cruz is like choosing between being “shot or poisoned.” South Carolina GOP Chairman Matt Moore lashed out at Trump’s plan to temporarily ban Muslims from the U.S. as un-American and unconstitutional.

And South Carolina Gov. Nikki Haley called on Republicans to resist the temptation to follow “the siren call of the angriest voices,” referring to Trump.

Yet even before New Hampshire results were final, Moore declined to condemn Trump when given the opportunity — a clear attempt not to alienate his supporters.

“Trump is holding rallies and drawing crowds like we’ve never seen, which is really impressive,” Moore said. “Clearly he’s brought a lot of new people into the fold. We’ll need those people to defeat Hillary Clinton.”