Back off! Tillerson slams Putin with powerful ultimatum - The Horn News 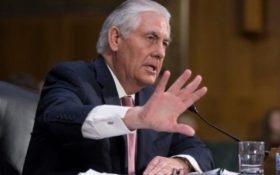 The ultimatum from President Donald Trump’s administration was clear: You’re either with the U.S. against Syrian strongman Bashar al-Assad, or the only friend you’ll have left in the world will be Iran.

As he embarked on a trip to Moscow following urgent meetings in Italy with top diplomats, Tillerson said it was unclear whether Russia had failed to take seriously its obligation to rid Syria of chemical weapons, or had merely been incompetent. But he said the distinction “doesn’t much matter to the dead.”

“We cannot let this happen again,” the secretary of state said.

“We want to relieve the suffering of the Syrian people. Russia can be a part of that future and play an important role,” Tillerson added in remarks to reporters. “Or Russia can maintain its alliance with this group, which we believe is not going to serve Russia’s interests longer term.”

Russia’s foreign ministry said in a statement that it hoped for “productive talks.” It said the outcome of the discussions is important not only for the Russia-U.S. relationship, but “for the overall atmosphere on the world stage.”

Tillerson is traveling to Russia several days after a chemical attack in Syria and a U.S. air strike on a Syrian government base that Moscow on Tuesday dismissed as “an act of aggression.” Moscow is a staunch ally of Assad whom the United States blamed for the savage chemical attack.

Since the U.S. launched airstrikes against Assad’s forces in retaliation for a chemical attack on civilians last week, Trump administration officials have given soft messages about whether Washington believes Assad definitely must surrender power — and when.

Tillerson said it was clear the U.S. saw no role for Assad in Syria’s future, given that he had lost legitimacy.

“It is clear to all of us that the reign of the Assad family is coming to an end,” he said. “But the question of how that ends and the transition itself could be very important in our view to the durability, the stability inside of a unified Syria.”

“That’s why we are not presupposing how that occurs,” Tillerson added.

He said the cease-fire talks that Russia and Iran have helped broker in the Kazakh capital, Astana, could generate momentum toward broader talks about a political transition — if the Astana talks succeed in creating a durable cease-fire. The resulting political talks would take place under the auspices of the United Nations process in Geneva.

“To date, Astana has not achieved much progress,” Tillerson said.