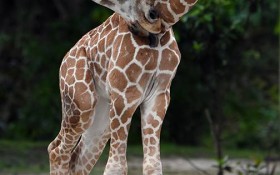 Officials at Zoo Miami say a young giraffe has been euthanized after suffering an apparent spinal injury.

Zoo spokesman Ron Magill told The Miami Herald that the 9-month-old giraffe, Wesley, poked his head between two posts Tuesday to look into an area where another giraffe was being examined by keepers.

Officials say the young giraffe panicked when he couldn’t get his head back out and began to thrash around. Magill said staff members were able to free Wesley after a few minutes, but he had already done significant damage to his spine.

The zoo’s veterinary team worked on the giraffe for several hours before deciding to euthanize him.

Magill said this is the first accident of its kind at the zoo. Workers were closing gaps in the area to prevent similar injuries.