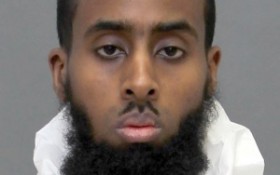 Ayanie Hassan Ali, 27, was born in Montreal to Muslim immigrants. Authorities say he thanked his adopted country by committing a terror attack against Canadian soldiers, stabbing two at the Canadian military center in Toronto on Monday.

“Allah told me to do this, Allah told me to come here and kill people,” Ali shouted, according to Toronto Police Chief Mark Saunders, after his attempts to walk by a guard stationed at the door of Joseph Shepard Building in Toronto, a military recruiting building, failed.

Ali, a Canadian citizen, has been charged with one count of attempted murder, two counts of assault with a weapon, one count of weapons dangerous, and one count of aggravated assault. He moved to Toronto from Montreal in 2011.

According to CBC News, when confronted by the door guard — a master corporal — Ali stabbed him with a “very large knife” and then wounded a second uniformed Canadian solider. Ali attempted to slash a female soldier nearby, but was quickly subdued by “six to eight” trained Canadian soldiers.

Cdn Forces Spokesperson outside scene of double-stabbing: It’s business as usual but we remain vigilant. https://t.co/3waUIuLtGk

Canada’s Prime Minister Justin Trudeau responded to the attack with the following:

Canadians – and the @CanadianForces – will not be intimidated by terror & hate. May the CAF members injured yesterday make a full recovery.

This was first reported by CBC News