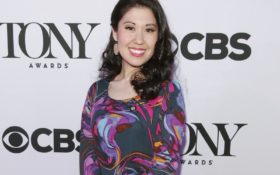 The 4-year-old daughter of a Tony-award winning actress was killed along with a 1-year-old when a driver apparently lost control of her vehicle and slammed into them as they crossed a Brooklyn street.

Ruthie Ann Blumenstein, who goes by the stage name Ruthie Ann Miles, was injured in the collision Monday in the Park Slope neighborhood. Her daughter Abigail was killed. Blumenstein, who is pregnant, was walking with friend Lauren Lew, who had 1-year-old Joshua in a stroller. He died and Lew was also injured.

A 46-year-old man was also struck by the car and was expected to survive. He and the two women were hospitalized.

Lew’s father, William Durston, who lives in Hawaii, told the Daily News of New York that he spoke with her.

“I’m concerned about her health and her mental well-being,” he said.

The driver, a 44-year-old woman from Staten Island, is seen on surveillance footage in a white Volvo stopping at the big, busy intersection on Ninth Street and Fifth Avenue. But the car slowly starts moving before it speeds up and strikes people in the crosswalk. Photos of the scene show the black stroller mangled on the roadside and the car wrecked after striking a parked car.

Blumenstein won a featured actress Tony in 2015 for her role as Lady Thiang in a revival of Rodgers and Hammerstein’s “The King and I,” opposite Kelli O’Hara and Ken Watanabe. It marked her Broadway debut. Blumenstein’s other credits included “Sunday in the Park with George” opposite Jake Gyllenhaal and playing Imelda Marcos in David Byrne’s off-Broadway musical “Here Lies Love.” She had a recurring role on the FX series “The Americans.”

Chenoweth tweeted: “sending love to you and your family there are no words. Except you are loved.”

Actresses Audra McDonald and Sutton Foster sent out links for a GoFundMe page raising money for the family. Miranda sent out a similar link for Lew.

The driver hasn’t been charged; police are looking into her medical history and driving record. A law enforcement official said authorities tested the driver and she was not drunk at the time. The official was not authorized to speak publicly and spoke to The Associated Press on condition of anonymity.

Witness Debbie LaSalle was crossing the same intersection when she saw the Volvo speed by, she told the Daily News.

“It was horrible to watch,” LaSalle, 44, said. “I’m still in shock. The white car was going really fast. The pregnant mother was facedown and the baby flew into the street. She dragged the stroller and . the other baby was pinned under the car.”