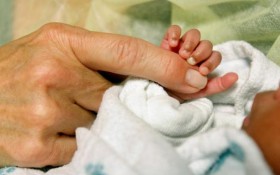 The average age of first-time mothers is at an all-time high in the U.S — over 26.

The change is largely due to a big drop in teen moms. But more first births to older women also are tugging the number up, said T.J. Mathews of the Centers for Disease Control and Prevention.

He’s the lead author of a report released Thursday that put the average age at 26 years, 4 months for women who had their first child in 2014.

The government began tracking the age of new mothers around 1970 when the average was 21. It’s been mostly climbing ever since, and spiked in about the last five years.

The number rocketed immediately after a 1973 U.S. Supreme Court ruling legalizing abortion, which is used mostly by young unmarried women. Also fueling the rise were improvements in birth control and greater opportunities for women, experts said.

Overall, the average age of first-time moms has been rising in every racial and ethnic group, and in every state. Since 2000, some of the most dramatic increases were for black mothers and for moms living along the West Coast.

However, the Northeast still has the highest average ages. Topping the list are Massachusetts and the District of Columbia, each at about 29, and Connecticut and New York, at or near 28.

In New York’s Park Slope neighborhood in Brooklyn — an enclave for families with young children — older moms are common.

Pushing a stroller on a frigid Wednesday morning, Meisha Welch said she didn’t have the first of her two children until just after her 38th birthday.

“Many of my friends I grew up with, we all have small children,” said Welch, now 42. “We had children at what in the past may have seemed like an older age. But now it feels more average.”