Authorities warn – watch out for this strange, unexplained emu! - The Horn News 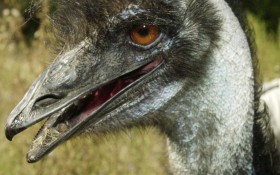 Be on the lookout, citizens, there’s an unexplained emu on the loose! Police are warning a New Hampshire town to watch out for a runaway emu.

Police in Bow, NH say several people have reported seeing an emu wandering around Saturday morning. They say they don’t know where the bird belongs.

Emus are among the largest birds in the world and are native to Australia.

Sgt. Art Merrigan says the department has checked with emu owners and haven’t found any of the animals to be missing. He says his department is not equipped to catch the emu and that a wildlife rehabilitator has been called to assist.

Bow Police Department dispatch supervisor Tricia Currier says police think the bird may have escaped from a farm. She says they are hoping to track down its owner.