Authorities turning to "Frankenbugs" to stop Zika - The Horn News 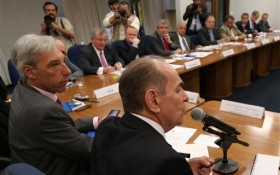 The World Health Organization says it may be necessary to use controversial methods like genetically modified mosquitoes to wipe out the insects that are spreading the Zika virus across the Americas.

The virus has been linked to a spike in babies born with abnormally small heads, or microcephaly, in Brazil and French Polynesia. The U.N. health agency has declared Zika a global emergency, even though there is no definitive proof it is causing the birth defects.

WHO said its advisory group has recommended further field trials of genetically modified mosquitoes, which have previously been tested in small trials in countries including the Cayman Islands and Malaysia.

“Given the magnitude of the Zika crisis, WHO encourages affected countries … to boost the use of both old and new approaches to mosquito control as the most immediate line of defense,” WHO said in a statement. WHO says at least 34 countries have been hit by the virus in the current crisis, mostly in Latin America.

Meanwhile, the European Union on Tuesday pledged 10 million euros ($11.2 million) to fund research on the mosquito and the Zika virus in Brazil — the epicenter of the outbreak. The pledge came as Brazilian Health Minister Marcelo Castro met with representatives of 24 European nations in the Brazilian capital, Brasilia.

Next week, WHO chief Dr. Margaret Chan will also travel to Brazil to discuss Zika and microcephaly with Castro and other officials, agency spokeswoman Fadela Chaib said on Tuesday.

WHO said previous experiments that released sterile insects have been used by other U.N. agencies to control agricultural pests. The agency described the Aedes aegypti mosquitoes that spread Zika — as well as other diseases including dengue and yellow fever — as an “aggressive” mosquito that uses “sneak attacks” to bite people, noting that the mosquito has shown “a remarkable ability to adapt.”

Last month, British biotech firm Oxitec said tests in Brazil in 2015 showed that genetically altered sterile male mosquitoes succeeded in reducing a type of disease-spreading mosquito larvae by 82 percent in one neighborhood in the city of Piracicaba. The genetically modified males don’t spread disease because only female mosquitoes bite.

Environmentalists have previously criticized the genetically modified approach, saying wiping out an entire population of insects could have unforeseen knock-on effects on the ecosystem.

Some experts agreed it might be worth using genetically tweaked mosquitoes given the speed of Zika but were unsure of the eventual consequences.

“The way this is done wouldn’t leave lots of mutant mosquitoes in the countryside,” said Jimmy Whitworth, an infectious diseases expert at the London School of Hygiene and Tropical Medicine. He said the Zika mosquitoes are an imported species that were accidentally brought to the Americas hundreds of years ago, and was optimistic their eradication wouldn’t damage the environment.

However, he said such a move would be unprecedented and it would be impossible to know what the impact might be before releasing the insects into the wild.

“You would hope that the ecology would just return to how it was before this mosquito arrived,” he said. “But there’s no way of knowing that for sure.”

Last week, a group of doctors in Argentina, Physicians in the Crop-Sprayed Towns, suggested the jump in microcephaly cases may not be caused by Zika, but by Pyriproxyfen, a larvicide used in drinking water that aims to prevent mosquito larvae from developing into adulthood. The group said the larvicide has been used since 2014 in Brazil in several areas with a reported rise in babies with birth defects.

Spokeswoman Chaib said scientists at WHO and elsewhere had rejected any such link.

Brazil’s government has repeatedly said pesticides were not connected to microcephaly, and has noted many cases of microcephaly in areas where Pyriproxyfen was not used. The government also noted that WHO had approved use of the chemical.