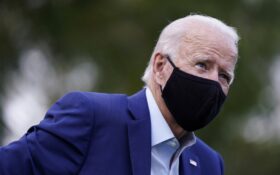 “I’m going to say something outrageous,” he warned everybody.

“The best way to get something done, if you — if you hold near and dear to you that you like to be able to — anyway —I — we’re going to get a lot done.”

It left out the fact that each dash represented several seconds of the president of the United States halting, pausing, and looking down at his notes totally lost.

Everyone who watched Biden speak knew it was a disaster.

During the campaign, Biden told parents to “make sure you have the record player on at night”…a technology that went out with the Berlin Wall.

During a town hall interview, President Biden admitted, “I get up in the morning, look at Jill and say, ‘Where the hell are we?’”

Barnardi said the leader of the free world confessed that he “has to ask his carer/wife where he is when he wakes up most morning.”

He dubbed the entire administration “Weekend at Biden’s,” a play on the movie “Weekend at Bernie’s,” where ambitious employees pretend their dead boss is still alive for their own gain.

The leader of the Western world is “cognitively deficient,” he said.

“To put it unkindly, he’s hopeless,” he said.

“This is the same Biden who addressed Kamala Harris as President Harris the other day,” Jones continued. “the same Biden who, during the presidential campaign, said he was running for the Senate.”

After playing a clip of Biden’s mistakes, including telling people he joined the Senate “120 years ago,” Jones asked, “What the Hell does that mean?”

“This is the president of the United States of America, who is illiterate, incoherent, cognitively deficient—and the leader of the Western world.”

Meanwhile, U.S. news outlets are always quick to point out that Joe Biden’s mental misfires may just be a stuttering problem.

“Stuttering is recognized as a disability under the Americans with Disabilities Act,” wrote The Hill newspaper.

It even said Americans should be inspired by his inability to utter a complete sentence.

“While Biden’s verbal missteps don’t cast him any favors on the debate floor, just him being a person with a speech impediment running for the highest office in the country is a powerful reminder for young people who may feel limited by their disabilities,” it claimed.

“This is why they keep him out of press conferences as much as possible,” wrote The New York Times’  James Reston about Reagan in 1984—10 years before he had Alzheimer’s Disease.

In 2018, MSNBC’s Lawrence O’Donnell accused President Donald Trump of living in a “dreamscape of dementia.”

But when it comes to Biden’s undeniable slow down, they claim it’s just a speech impediment.

“Frankly, at this point, it’s getting difficult to watch,” said Hannity. “After months of constant, neverending, nonstop gaffes, very weird cognitive struggles, I think it is well past time that we get a little transparency surrounding his health and his well-being.”

Jones, who is not a young man himself, said he had to speak out about Biden’s mental health, “because his incoherent fantasies are going to affect all of us.”

It’s too bad more U.S. media outlets—aside from The Horn—don’t have the guts to level with the American people the way their Australian counterparts do.