Aunt of 13 “horror house” kids speaks out - The Horn News 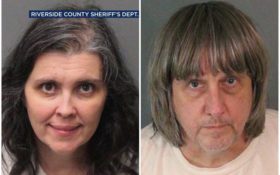 Thirteen malnourished siblings allegedly kept captive in filthy conditions by their parents in a Southern California home lived a strict existence with no social lives and no contact with extended family, two of their aunts said Wednesday.

Robinette is the sister of Louise Turpin, 49, who along with her husband, 57-year-old David Allen Turpin, were jailed on $9 million bail each. Charges that may include torture and child endangerment could come Wednesday and a court appearance is scheduled for Thursday, authorities said.

Deputies said some siblings were shackled to furniture in the foul-smelling home in suburban Riverside County. They were so malnourished that the older ones still looked like children.

Robinette said she voiced concerns to her sister about the children’s health.

“I always made comments to Louise when I did talk to her, about, gosh, they are so skinny,” Robinette said. “She would laugh it off and say David’s so tall and lanky, they are going to be like him.”

The arrests Sunday came after a 17-year-old daughter who looked closer to 10 jumped out a window and called 911. Her parents had made the home a private school, a prison, and a veritable torture chamber for the siblings aged 2 to 29, authorities said during a press conference Tuesday.

Until the girl fled with photographic evidence, it appears no one, neither neighbors nor public officials, knew anything about what was happening inside.

Few details have been released about how the parents kept them captive despite what appeared to be opportunities for them to leave.

Another aunt, Elizabeth Jane Flores, told ABC News’ “Good Morning America” that she tried for years to get in touch with her sister, Louise Turpin, but Turpin shut her out.

“I want to reach out to the kids, I want them to know that for years we begged to Skype, we begged to see them, the whole family,” she said.

Flores tearfully said she and Turpin didn’t have a relationship for two decades beyond the odd phone call. She said she was shocked by her sister’s arrest.

In one of many surreal details that emerged as the investigation grew, it appears that an Elvis impersonator who performs weddings in Las Vegas is one of the few people who had direct dealings with the family, and he saw a different side.

“It’s very disturbing because I felt like I did know them,” said Kent Ripley, the Elvis impersonator who led the parents through at least three vow renewal ceremonies in recent years, most recently on Halloween, 2015.

He looked back at YouTube videos of the ceremonies after hearing the news, including two that show all the children dancing and smiling, with matching outfits and similar haircuts.

“Watching them now it’s kind of haunting and disturbing,” Ripley told The Associated Press in an interview Tuesday. “They all looked young and thin but I figured it was just their lifestyle. Maybe the activities they did, maybe because of their religious beliefs. I didn’t get that in depth with them but I knew they were a fun family.”

Numerous photos on the couple’s Facebook page show the children dancing at the Elvis Chapel, visiting an amusement park that appears to be Disneyland and going on other outings, always looking thin but often smiling.

It was a normal public face the family put on that included the ordinary outward appearance of their house, one of many brown-and-beige homes that lined a residential street. Four vehicles were parked in their driveway Tuesday, with a horde of international media surrounding the house.

Neighbors, just a few steps away in either direction, said the family kept to themselves and never so much as waved. No calls about trouble ever came to police or child welfare officials.

But inside it was a stinking mess, the conditions “horrific,” Riverside County Sheriff’s Capt. Greg Fellows said Tuesday.

“If you can imagine being 17 years old and appearing to be a 10-year-old, being chained to a bed, being malnourished and injuries associated with that, I would call that torture,” Fellows said.

He said there was no indication any of the children were sexually abused, although that was still being investigated.

The couple, married 32 years, sometimes dressed their children alike in pink dresses or Dr. Seuss T-shirts, kept them away from outsiders and cut the boys’ hair in a Prince Valiant-style resembling that of their graying father. Photos show nearly all the girls with shoulder-length brown hair parted in the middle.

The Turpins moved to Southern California from the Dallas area in 2011, and bought the home in 2014 in the rapidly growing city of Perris 70 miles (113 kilometers) southeast of Los Angeles with their 12 children. They lived there quietly for at least three years and had another baby.

Turpin worked as an engineer at the Northrop Grumman aerospace company and earned $140,000 annually and his wife was a homemaker, records showed.

Their house doubles as the Sandcastle Day School, where David Turpin is listed as principal and its enrollment of six includes only the couple’s younger children, Fellows said.

No state agency regulates or oversees private schools in California, and they are not licensed by the state Education Department.

The children are “very friendly,” he said. “They’re very cooperative, and I believe that they’re hopeful that life will get better for them after this event.”

Dr. Donald Kirby, director of the Center for Human Nutrition at Ohio’s Cleveland Clinic, said the siblings’ pale complexions could reflect a lack of sunshine and iron deficiencies caused by insufficient vitamins.

He said their small stature and childlike appearance also indicates they were probably undernourished for many years.

“What that means is this has been a very long process and that during the real growth spurt years that the needed nutrients weren’t given,” Kirby said. “At some point the body locks in and you’re not able to grow anymore. This didn’t happen last week, last month or even last year. This has been going on probably a very long time.”

Kirby said the siblings’ physical and emotional recovery period will likely be long and arduous.

“Lots of things are going to need to be done for these poor people,” he said.