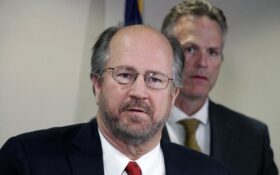 “Kevin Clarkson has admitted to conduct in the workplace that did not live up to our high expectations, and this is deeply disappointing,” Republican Gov. Mike Dunleavy said in a statement. “This morning he took responsibility for the unintentional consequences of his actions.”

The woman later said she was uncomfortable with the contact from Clarkson and reported it to her supervisor. In his resignation letter, Clarkson wrote to Dunleavy: “I sincerely apologize to you for my lapse of judgment.”

The Anchorage Daily News and ProPublica published a story earlier Tuesday outlining text messages Clarkson sent to the state employee. In all, he sent her 558 texts in about a month, according to the newspaper, which received them from a third-party source.

In his resignation letter, Clarkson confirmed the text conversations were with a state employee who didn’t work for the Department of Law and whom he did not supervise.

They discussed food, movies, books and even attempts by Clarkson’s wife to get a visa for her son to leave Colombia. Dunleavy had previously written to President Donald Trump asking if he could help clear immigration challenges so Clarkson’s wife and stepson could join him in Alaska.

Clarkson said he and the woman also exchanged pictures of children and grandchildren, and he sent her pictures of food he prepared.

“These texts included invitations for this person and her children to come to my home to share a meal, which she politely declined,” Clarkson said. “All of these texts were ‘G’ rated. There is nothing remotely salacious about the texts.”

He said the texts included mutual endearments “between us in words and emojis. On several occasions, this person initiated a friendly hug when I came to her workplace, and I reflexively gave her a tiny peck of a kiss on top of her head.”

The woman eventually expressed her discomfort to Clarkson. He said he respected her wishes and stopped communicating with her by text.

He claims a political opponent became aware of the situation and contacted the governor’s office. At that point, the woman reported the situation to her supervisor.

“I immediately and fully cooperated in the ensuing process, and have accepted the finding by Human Resources that my actions, however unintentionally, created an uncomfortable workplace environment for this employee,” Clarkson wrote.

He said he made an “error in judgment, which I recognize was wholly and only mine.”

Attempts by the AP to reach Clarkson by phone and email weren’t immediately successful.

Dunleavy appointed the longtime Anchorage lawyer as attorney general in December 2018, and he was confirmed the following April after telling lawmakers he would not bring his personal views to the job. Gay rights and abortion rights advocates raised concerns over Clarkson, who helped draft the state’s 1998 constitutional amendment defining marriage as between one man and one woman. That was struck down in 2015 when the U.S. Supreme Court legalized gay marriage.

“Governor Dunleavy called Mr. Clarkson ‘a wise and trusted legal advisor, a man of exceptional character, and a devoted husband and father,’ yet he has proved himself to be none of these things,” Lindsay Kavanaugh, executive director of the Alaska Democratic Party said in a statement.

“Sexual harassment must not be tolerated anywhere. When an attorney fails to understand the difference between right and wrong, he has no business in the legal profession, never mind as the top attorney in the state,” Kavanaugh said.