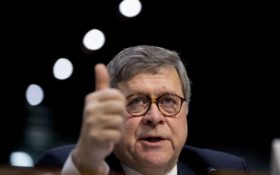 Attorney General William Barr just dropped a major bombshell on Hillary Clinton and her connection to FBI activity during the 2016 presidential campaign.

Appearing on CBS News “This Morning” on Friday, Barr said he’s working with the directors of the CIA, FBI, and Department of Homeland Security to investigate the “spying” that was ordered on then-Republican presidential candidate Donald Trump’s campaign in 2016.

And what he’s seen so far has him very concerned.

Part of Barr’s investigation is looking into the FISA wiretap that was acquired by outspoken anti-Trump FBI agents, who reportedly used “evidence” provided by the Hillary campaign to apply for their warrant. The more he finds out, Barr says, the more questions he has — and he’s determined to get to the bottom of it.

“People have to understand … one of the things here is that these [spy] efforts in 2016, these counter-intelligence activities that were directed at the Trump Campaign, were not done in the normal course and not through the normal procedures as a far as I can tell,” Barr said. “And a lot of the people who were involved are no longer there.”

“You have testified that you believe spying occurred … into the Trump campaign?” CBS News chief legal correspondent Jan Crawford asked.

“Republics have fallen because of Praetorian Guard mentality where government officials get very arrogant,” Barr said, a reference to the fall of the Roman Republic. “They identify the national interest with their own political preferences, and they feel that anyone who has a different opinion is somehow an enemy of the state.”

Barr wouldn’t commit when questioned whether Hillary’s campaign or others in the Obama administration committed crimes in 2016 — but he vowed to get the answers if she broke the law.

“There were counterintelligence activities undertaken against the Trump Campaign,” Barr said. “And I’m not saying there was not a basis for it, that it wasn’t legitimate — but I want to see what that basis was, and make sure it was legitimate.

When asked if he’d uncovered evidence of wrongdoing, Barr said everything that had been found has created “more questions.”

“Like many other people who are familiar with intelligence activities, I had a lot of questions about what was going on,” Barr said about the wiretap into Trump’s campaign. “I assumed I’d get answers when I went in.”

“I have not gotten answers that are satisfactory,” he said. “In fact, I probably have more questions, and some of the facts that I’ve learned don’t hang together with the official explanations of what happened.”

However, Barr did say the spying he’s seen can’t be legally charged as an act of treason by former President Barack Obama’s administration officials.

“Not as a legal matter, no,” Barr told CBS News.

“I think one of the ironies today is that people are saying that it’s President Trump that’s shredding our institutions,” he said. “I really see no evidence of that — I really haven’t seen a bill of particulars as to how that’s being done.”

“From my perspective the idea of ‘resisting’ a democratically-elected president and basically throwing everything at him on the grounds that we have to stop this president,” Barr said. “That is where the shredding of our norms and our institutions is occurring.

“And you think that happened with the investigation into the [Trump] campaign, potentially?” Crawford asked.

“I am concerned about that,” Barr concluded.

[Must read] Nancy Pelosi trying to hide THIS bombshell from William Barr!?