Atheists to students: Stop praying for America - The Horn News 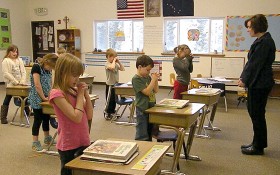 Atheists have delivered a blow to Christianity at a Texas school district, whose high school principal and other teachers are now banned from joining student-run prayer events.

The school district is also considering disbanding their religious, student-run after-school club under the threat of lawsuit.

The pressure comes from the notorious Freedom From Religion Foundation (FFRF), which threatened to tie the school down with expensive legal action unless the district complied to their demands.

The FFRF letter also attacked the religious club, First Priority Club, despite it being student led and formed. In their letter, FFRF also demanded the school district ban all other faculty and adults from joining the students around the school’s flagpole, where students gather after school once a year to pray.

The atheist group’s attack was aimed to stop the See You at the Pole event, a 25-year-old tradition started by students in Texas. The event encourages Christian students to gather together all around the nation around their schools’ flagpoles to pray.

A lawyer for the Prosper Independent School District announced that their High School principal, Greg Wright, will no longer be allowed to pray “in his capacity as District employee at future on-campus, student-led See You at the Pole events.”

You can read more on the See You at the Pole tradition here.