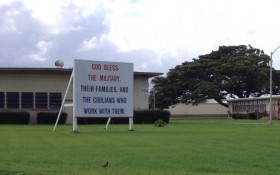 Not if a group of atheist activists have their way.

After the terrorist attacks on September 11th, 2001, a message of hope was erected on the Marine Corps Base Hawaii on Oahu island. “God Bless the military, their families, and the civilians who work with them.” the sign reads.

Now, the Military Religious Freedom Foundation, which represents atheists and secularist interests, is demanding the military take down the sign.

After fourteen years, the nonprofit group `is now coming forward to demand the sign’s removal, saying its message violates the US Constitution’s Establishment Clause because it “sends the clear message that your installation gives preference to those who hold religious beliefs over those who do not, and those who prefer a monotheistic, intervening god over other deities or theologies” according to demands for the sign’s removal sent to the commanding officer of the base, Col. Sean Killean.

The group, according to multiple news sources, has claimed the sign asking for God’s blessings for the military is like a “tarantula on a wedding cake” and that it shouldn’t be allowed, for fear it offends non-believers.

Critics have strongly disagreed with the demands, and plan to fight the removal request.

The executive director of Chaplain Alliance for Religious Liberty, Ron Crews, said in a public statement, “Only someone with a great misunderstanding of the First Amendment or an axe to grind against religion would claim that such a slogan poses a threat or is in any way unconstitutional,” and went on to say, “The real threat is posed by those who want to whitewash any reference to God from public discourse — even ones as innocuous and uplifting as this one.”

A spokesperson for the Marine Corps declined to offer comment, other than to acknowledge that a complaint had been received.