Atheists demand you stop praying for police - The Horn News 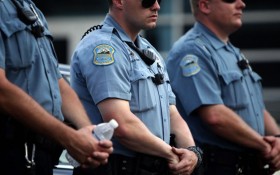 A police department in Tennessee has asked citizens for their prayers – and that has anti-religion activists fuming. They’re trying to silence the prayers of cops and citizens alike.

The Johnson City Police Department began a program called, “Adopt a Cop,” in which citizens pray for an officer’s safety each day, and occasionally send them thank you notes.

Now, an anti-religion activist group, the Freedom from Religion Foundation (FFRF), is trying to stop them. They sent a letter of complaint Tuesday to the JCPD’s Chief Mark Sirois.

The letter argued that the religious program is “not actually any protection for your officers.”

The FFRF also complained about JCPD’s chaplaincy program, in which a chaplain is employed to assist with death notifications, support victims in times of crisis, respond to suicide incidents and a variety of other duties.

The FFRF writes, “The employment of chaplains, even if volunteer, demonstrates government endorsement of religion, which is a violation of both the federal and Tennessee constitutions.”