The astonishing record. The huge farewell. A big night for the NBA - The Horn News 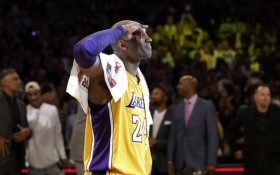 The stars did not disappoint.

And the most-celebrated closing night in NBA regular-season history not only lived up to expectations, it might have exceeded them with a pair of performances that will be talked about for years to come.

Golden State became the first team to win 73 games in a season, Warriors guard Stephen Curry scored 46 points and topped the 400 3-pointer mark to cap what will almost certainly be his second straight MVP campaign. Kobe Bryant’s career with the Los Angeles Lakers ended in most surprising fashion — a 60-point game, the first time he’s gotten to that plateau since 2009.

“I think this has been an amazing day for sports fans, basketball fans in particular,” Bryant said as he wore his Lakers’ uniform about an hour after the game, not quite willing to take it off for the final time. “It’s been a great day with them setting such an unbelievable record — you think about that, 73 wins, that’s ridiculous. And then obviously what happened here tonight, it’s been a great night in basketball history.”

That most everyone can agree on, including President Barack Obama, Michael Jordan and NBA Commissioner Adam Silver.

The Warriors beat the Memphis Grizzlies 125-104, finishing the season 73-9 and breaking the 72-10 mark that was put together by Jordan and the Chicago Bulls and lasted 20 years as the NBA’s all-time single-season standard. Steve Kerr played for that Bulls team, and was the one who went on to coach these Warriors to a level not even that club could reach.

Jordan congratulated the Warriors in a statement released after the game. He also said, “The Warriors have been a lot of fun to watch and I look forward to seeing what they do in the playoffs.”

In other words, Jordan was saying ‘now go win the title.’ When the Bulls won 72 games, they capped that season with a championship.

Curry made 10 3’s to get to 402 for the season, officially wrapped up the NBA scoring title, and sent a message to the rest of the league going into the postseason — that the Warriors are far from satisfied, with Curry saying he was happy that all the team needs to worry about now is getting 16 postseason wins.

“I just try to keep getting better,” said Curry, who was the MVP last year at 23.8 points per game — and went to 30.1 points per game this season. “I just want to keep pushing myself.”

“Nobody really cares about the 73 wins it was all about Kobe today,” Indiana guard C.J. Watson wrote on Twitter.

“There’s no way I could possibly imagine this happening,” Bryant said.

Bryant scored 60 points and took 50 shots, the most of any game in his career — a total that came with the blessing of teammates who just wanted him to score as much as possible one final time.

“Felt good to be able to do that,” Bryant said, “one last time.”

And when it ended, the basketball world was buzzing.

“4-13 should go down in the archives as #MambaDay,” longtime NBA sharpshooter Mike Miller tweeted. “@Kobe Bryant thanks for the memories. It was amazing to be able to compete against u!”

Added Heat forward Chris Bosh: “73 wins and one dude shooting 50 shots in one game on the same night. Has that ever happened before?” Bosh ended that tweet with the hashtag “awesome.”

Fans who had to resort to the secondary resale markets paid more than $1,000 for tickets — or much more in some cases — just to get a seat to see the Warriors chase history or Bryant play one final time.

Odds are, none of them left thinking they made a mistake.

“Whoever paid those crazy … prices for those tickets y’all got y’all money’s worth tonight,” Lakers guard Jordan Clarkson tweeted.

Fans in Los Angeles bought up just about every piece of Bryant memorabilia they could find at Staples Center, and 350 miles or so up the road at Oracle Arena, Warriors fans cheered long and loud when the 73rd win was finally secure.

“The team held itself to a high standard throughout the season, playing with purpose every night and captivating fans around the world with its free-flowing style, spectacular shooting and flair for the dramatic,” Silver said. “Kudos to the entire Warriors organization.”

Not long after Silver released his statement, the NBA put out its schedule for the first round that starts Saturday. The confetti that flew in Oakland was swept up, the champagne that was sprayed on Bryant after his finale had long dried.

The night was over.

The playoffs await for the Warriors, but not Bryant. His career is done, and his last act on the floor at Staples Center was a two-word farewell to Lakers fans: