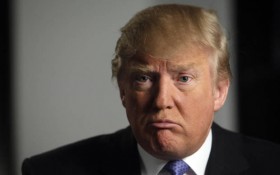 As the heat intensified on Trump on Tuesday, he sent the following tweet to his 5 million Twitter followers:

A new poll indicates that 68% of my supporters would vote for me if I departed the GOP & ran as an independent. https://t.co/ztP5d2ctZl

The Republican party has long feared an independent run by Trump, which many believe would split the conservative vote and hand the White House to Hillary Clinton.

The Republican Party, said Jeb Bush adviser Ana Navarro, is stuck between “a rock and a jerk” less than eight weeks before the first primary-season votes are cast in Iowa.

Beleaguered 2016 rivals and other GOP politicians condemned Trump’s proposal and complained that his divisive positions were dominating attention in the crowded Republican contest.

“This is not conservatism,” declared House Speaker Paul Ryan, the Republican Party’s top elected leader. “What was proposed yesterday is not what this party stands for. And more importantly, it’s not what this country stands for.”

One by one, Republican officials across the country lashed out at Trump’s plan, which calls for a “total and complete shutdown of Muslims entering the United States” to help quell the threat of terrorism.

In Mississippi, Republican National Committee member Henry Barbour said Trump’s comments “aren’t worthy of someone who wants to occupy 1600 Pennsylvania Ave.” He said Trump would be a “disaster politically for the GOP if he won the nomination.”

Barbour helped author the Republican National Committee’s “Growth and Opportunity Project” after a painful 2012 presidential election that forced party leaders to re-evaluate their strategy in presidential contests to reflect the nation’s demographic shifts. Among other things, the report cited an urgent need for GOP leaders to adopt an inclusive and welcoming tone on issues such as immigration.

Yet Trump has vaulted to the top of the Republican 2016 field by attacking immigrants in many cases. His continued popularity underscores the deep divide between Republican leaders and the party’s conservative base, which holds outsized influence in the presidential nomination process.

Indeed, Trump’s plan was cheered during a South Carolina rally Monday evening, and vocal supporters across the country defended the Muslim ban as necessary for national security. Polling suggests the sentiment is likely fueled by sharp strain of xenophobia: A new AP-GfK poll found 8 in 10 Republicans think there are too many immigrants coming from the Middle East.