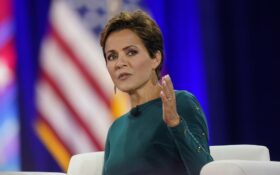 The nation’s last undecided race for governor got even closer Sunday.

Democrat Katie Hobbs has been leading Republican Kari Lake in the race for governor of Arizona.

After Sunday’s vote dump, Hobbs led by 26,000 votes. Hobbs is coasting on a one-point margin, down about 10,000 votes from a day earlier.

Lake has never led in the race but insists that she’ll take the lead as early ballots dropped off at polling places are added to the tally. She won a majority of the 99,000 votes reported in Maricopa County on Sunday, but it’s not clear if she’ll be able to narrow the gap with the roughly 160,000 remaining to be counted statewide.

A former television anchor, Lake is well known in much of the state and drew a fervent following among supporters of former President Donald Trump. Meanwhile, Hobbs has served as Arizona’s secretary of state since 2019.

Lake has been highly critical of Hobbs for presiding over a protracted vote count. Hobbs supporters say that it’s nothing new in a sparsely populated state where the overwhelming majority of people vote on ballots they receive in the mail.

This year, Maricopa County officials reported that a record number of early ballots were dropped off at the polling place on Election Day, delaying the count while officials whether they’re legitimate.

The Associated Press has not yet called the race because there are still too many votes left to count to conclude Hobbs’ lead is insurmountable.

In Arizona, the race for governor is still anybody’s game.

Democrats won the races for U.S. Senate and secretary of state in Arizona, but Lake is outperforming the Republicans in those races.

So far, the Democrats have gained one governorship on net. Democrat Gov. Steve Sisolak lost re-election in Nevada, but Democrat candidates are set to succeed Republican governors in Maryland and Massachusetts.

In Arizona’s race for governor, a Lake victory could elevate the GOP’s performance from a net loss to a stalemate. If the GOP retains control of the state legislature, then a Lake victory would continue the Republican trifecta.

Arizona is seeing close, consequential races not only for governor, but also for U.S. House.

Republican Rep. David Schweikert took the lead for the first time but was less than 900 votes ahead of Democrat Jevin Hodge in a suburban Phoenix House district that Democrats have hoped could help them defy expectations and win a majority in the House.

Both House races were too early to call.