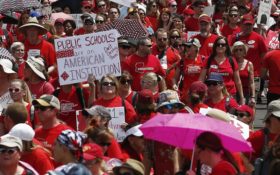 Arizona and Colorado teachers plan to don red shirts and descend upon their respective Capitols for a second day in a growing educator uprising.

Educators in both states want more classroom resources and have received offers either for increased school funding or pay, but they say the money isn’t guaranteed and the efforts don’t go far enough. The walkouts are the latest in demonstrations that spread from West Virginia, Oklahoma and Kentucky.

On the first day of the historic statewide walkout in Arizona, around 50,000 educators and their supporters marched Thursday through downtown Phoenix in nearly 100-degree (38-Celsius) heat and swarmed the Capitol grounds.

In much cooler Colorado, several thousand educators rallied around the Capitol, with many using personal time to attend two days of protests expected to draw as many as 10,000 demonstrators.

Lawmakers in Colorado have agreed to give schools their largest budget increase since the Great Recession. But teachers say Colorado has a long way to go to recover lost ground during the downturn and stick to the provisions of a voter-approved amendment aimed at increasing school funding and countering the effect of the state’s strict tax-and-spending limits.

Arizona’s Republican governor, Doug Ducey, has proposed 20 percent raises by 2020 but said he has no plans to meet with striking teachers or address other demands.

Teachers voted to walk out after Ducey unveiled his plan, saying that it failed to meet their other demands including about $1 billion to return school funding to pre-Great Recession levels and increased pay for support staff.

More than 840,000 students were out of school as a result of Thursday’s walkouts, according to figures from The Arizona Republic.

Most of Arizona’s public schools will be closed the rest of the week, and about half of all Colorado students will see their schools shuttered over the two days as teachers take up the Arizona movement’s #RedforEd mantle. In Oklahoma and West Virginia, teacher strikes stretched beyond the one-week mark.

Organizers say they haven’t decided how long their walkout will last.

“We want to make sure we can gauge the membership about what they want to do,” said Derek Harris, one of the organizers of grass-roots group Arizona Educators United.

One major Phoenix-area district, Chandler Unified, said Thursday it planned to reopen schools Monday but reversed itself Friday, saying schools would remain closed “based on the number of teachers who have reported their absence for Monday.”