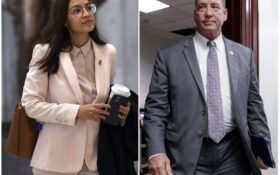 Rep. Alexandria Ocasio-Cortez, D-N.Y., has gained a reputation for her willingness to engage in the harsh side of politics.

But on Tuesday, she got a little bite back — and Democrats are demanding an apology.

A Republican colleague allegedly cursed out Ocasio-Cortez outside the Capitol in an encounter that a reporter said ended with the congressman using the slur “b***h” as he walked away.

The No. 2 House Democrat demanded that Florida Rep. Ted Yoho, one of the House’s most conservative members, apologize to Ocasio-Cortez, one of the House’s most progressive, over Monday’s confrontation. A spokesperson for Yoho denied that the lawmaker had used a sexist slur, saying the Florida congressman had instead muttered “bull——” to himself to describe Ocasio-Cortez’s policies.

There was little sign that Yoho’s GOP colleagues are willing to defend him, and the House minority leader said he would speak to Yoho.

“We think everyone should show respect to one another,” Kevin McCarthy, R-Calif., told reporters about the episode, which occurred during an election year in which partisan divisions have been rubbed raw.

In a tweet Tuesday, Ocasio-Cortez, D-N.Y., said she had never spoken to Yoho “before he decided to accost me” as they passed each other on the Capitol’s outdoor steps during a vote.

“Believe it or not, I usually get along fine w/ my GOP colleagues. We know how to check our legislative sparring at the committee door. But hey, ‘b*tches’ get stuff done,” she wrote.

I never spoke to Rep. Yoho before he decided to accost me on the steps of the nation’s Capitol yesterday.

Believe it or not, I usually get along fine w/ my GOP colleagues. We know how to check our legislative sparring at the committee door.

A reporter for The Hill newspaper witnessed the encounter, the newspaper said. According to the news outlet, Yoho approached Ocasio-Cortez and said her recent comments downplaying a violent crime surge in New York City during the coronavirus pandemic were “disgusting.”

“You are out of your freaking mind,” Yoho added. Ocasio-Cortez told Yoho he was being “rude,” the article said.

The Hill said as the two walked in opposite directions, Yoho uttered the curse to “to no one in particular.”

Walking with Yoho was Rep. Roger Williams, R-Texas, another conservative lawmaker. Heather Douglass, Williams’ spokesperson, said he didn’t hear the exchange and “would have immediately condemned that type of language towards any colleague.”

Ocasio-Cortez fired back, saying Williams was lying about not hearing the conversation and had even participated in it, making his own remark about “throwing urine.”

“When he undeniably sees another man engaged in virulent harassment of a young woman, just pretend you never saw it in the most cartoonish manner possible,” she wrote.

Yoho, 65, is a member of the House Freedom Caucus and a foe of establishment GOP leaders he considers too moderate like former Speaker John Boehner, R-Ohio. He’s retiring when his term ends in January.

Ocasio-Cortez, 30, is a high-profile first-term congresswoman whose vociferous support for far-left proposals like the Green New Deal has won her appearances in GOP campaign ads casting her as a liberal villain.

Yoho spokesperson Brian Kaveney said in an email Tuesday that Yoho “had a brief member to member conversation” and had not called Ocasio-Cortez a name. He wrote that Yoho said “bull****” to himself, “summarizing what he believes her policies to be.”

“It is unfortunate that Rep. Ocasio-Cortez is using this exchange to gain personal attention,” said Kaveny.

Kaveny did not immediately respond to a follow-up email asking if Yoho would apologize.

House Majority Leader Steny Hoyer, D-Md., said Yoho’s comments were “despicable and unacceptable” and require an apology on the House floor. By late afternoon Tuesday, there was no indication whether that would occur.