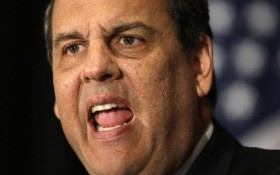 New Jersey Governor Chris Christie may be a lot of things — but quiet isn’t one of them.

Christie opponents are having a laugh after he reportedly had to leave an Amtrak train “quiet car” after talking too loudly on his cell phone.

Christie spokeswoman Samantha Smith says he accidentally took a seat in the quiet car while traveling from Washington on Sunday morning.

Smith says after breaking “the cardinal rule of the quiet car,” Christie promptly left for the cafe car.

She says he was talking on a cell phone when a conductor pointed out it was the quiet car. Unaware of it, Christie told the caller he would call back after changing cars.

Conductors generally urge passengers to maintain a “library-like atmosphere” in the quiet car. It’s not uncommon for conductors to ask noisier passengers to change cars.