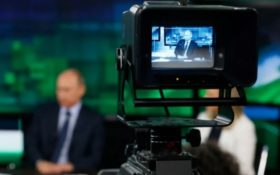 Lithuania’s media watchdog says a Russian state-run television station will be temporarily suspended after a Russian politician made harsh anti-U.S. comments deemed as “incitement to war, discord and hatred.”

Edmundas Vaitiekunas, chairman of Lithuania’s radio and TV commission, said Wednesday the RTR Planeta channel, the international service of Russian state-owned broadcaster VGTRK, would be off the air for a three-month period from Monday to Feb. 21.

The decision came after Vladimir Zhirinovsky, leader of Russia’s nationalist Liberal Democratic party, said on the air that if U.S. troops get near Russia’s borders “they will burn down with the crew.”

Vaitiekunas said it wasn’t the first time the channel had been banned for similar violations, adding that it tends to tone down its rhetoric after sanctions.