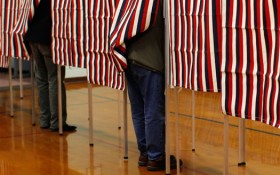 Election Day is in full swing across the country on Tuesday. Political pundits are watching for the winners and losers, and wondering what it means for the 2020 presidential election.

Behind the scenes, not all was what it seems.

And Kentucky, one of the most important battleground election states for President Donald Trump in 2020, encountered some problems just hours after the first ballot was cast.

According to the Lexington Herald-Leader, the Fayette County Clerk website inexplicably crashed as voting began.

Deputy Clerk Meredith Watson said the website serves as a useful resource for voters who need to find out where the polling locations are located.

Around that time, the Lexington Herald-Leader reported that 32 calls were made — five of which came from Fayette County, including reports on campaign violations and general election fraud.

Beyond Fayette County, complaints of foul play at the ballots got dead serious — literally!

One grievance alleged that a dead person was voting.

Another said they saw a convicted felon vote.

There was even a call reporting bribery.

The Kentucky newspaper reported that only about 31 percent of voters were expected to turn out for the election. A few of the marquee races on the ballot include the governor, attorney general, secretary of state and treasurer. Watson said that the office received 1,728 absentee ballots.

“You will vote to re-elect Kentucky Governor Matt Bevin whose done a great job,” Trump said. “Matt is a veteran. Matt is a patriot. He’s done it all. He’s been a very, very successful business leader.”