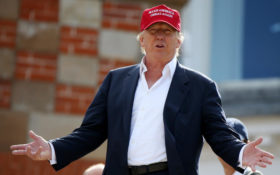 A manager of a Canadian restaurant was pleased with himself for taking a stand against Trump supporters – but he quickly found himself out a job.

Darin Hodge was the manager at the Teahouse in Stanley Park seafood restaurant in Vancouver, until he confronted a patron for wearing a “Make America Great Again” hat. The customer was minding his own business, but that didn’t stop Hodge from asking him to leave solely base on his support of Trump.

According to CBC News, the customer “said he had a right to wear it. [Hodge] said if you don’t take the hat off, we won’t serve you. And the man left.”

As a result, Hodge was abruptly fired by The Sequoia Company, which owns and operates the Teahouse. A statement indicated that Hodge failed to respect the company’s “philosophy of tolerance.”

“[Hodge] was aware what he was doing was probably contrary to our values and our philosophy as a company in terms of hospitality and inclusiveness,” Andrew Crimp, general manager, said. “We don’t discriminate against people based on political beliefs.”

In a Facebook post following the incident, Hodge wrote that did not regret his hateful actions, calling himself “a person with a strong moral backbone.”

Critics of Hodge have flooded the Teahouse’s Yelp page with reviews that condemn the manager and applaud the restaurant for taking action against Hodge.

“Former manager served huge portions of bias, hatred, intolerance, lies and outright stupidity. The fact he is gone is a big win those who have the intelligence and class to be accepting of other ideas and opinions,” one user wrote.

“Kudos to the restaurant for upholding their values and morals in firing this cretin.”