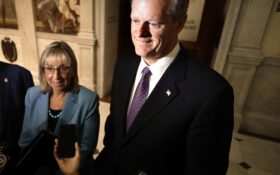 Gov. Charlie Baker has won election twice in dark blue Massachusetts. He has won praise from Democrats and independents for his draconian measures to stymie the coronavirus, but he’s also angered some Republicans by bashing former President Donald Trump.

Now he’s declining to run for a third term.

“After several months of discussion with our families, we have decided not to seek re-election in 2022,” he wrote, referring to himself and Lt. Gov. Karyn Polito.

“This was an extremely difficult decision for us,” the two Republicans wrote. “We love the work, and we especially respect and admire the people of this wonderful Commonwealth. Serving as Governor and Lieutenant Governor of Massachusetts has been the most challenging and fulfilling jobs we’ve ever had. We will forever be grateful to the people of this state for giving us this great honor.”

Baker spoke about his newfound preference for governing over campaigning, and he recounted the difficulties of the pandemic.

“If we were to run, it would be a distraction that would potentially get in the way of many of the things we should be working on for everyone in Massachusetts. We want to focus on recovery, not on the grudge matches political campaigns can devolve into,” the two politicians wrote.

“We have all been going through an extraordinarily difficult pandemic, and the next year will be just as important, if not more important, than the past year. We have a great deal of work to do to put the pandemic behind us, keep our kids in school, and keep our communities and economy moving forward. That work cannot and should not be about politics and the next election.”

Baker began his political career as a cabinet bureaucrat, and he first ran for governor in 2010, losing to Democratic incumbent Deval Patrick by six points.

He ran again during the 2014 red wave. He stayed 1.9 points ahead of Democrat candidate Martha Coakley, the state’s attorney general.

Baker won reelection in 2018 by more than 30 points, and he remains popular. He boasts an approval rating of 80 percent, according to the most recent poll. What’s more, Baker is pulling those numbers in Massachusetts, a state considered staunchly Democratic at the presidential level.

In other words, he rallied some Democrats to his side… including President Joe Biden.

In May, Biden congratulated Baker at a virtual meeting about corona prevention. Biden also made headlines during last year’s campaign for uttering the phrase “Gov. Charlie Parker of Massachusetts,” an embarrassing mix-up between Gov. Charlie Baker and jazz legend Charlie Parker.

Meanwhile, Baker has alienated Trump. He even called for Trump’s impeachment at a press conference in October 2019.

Before Baker even announced his decision to step aside, Trump had already endorsed Baker’s opponent, Geoff Diehl, for the 2022 Republican primary.

Plus, by stepping aside, Baker may allow the Democrats to retake control of the state.

The Democratic Governors Association is already eyeing the state, according to Fox News.

DGA Executive Director Noam Lee told Fox on Wednesday, “The DGA looks forward to aggressively holding the Massachusetts GOP and their extreme candidates like Diehl accountable for their far-right positions and electing a Democratic governor in Massachusetts next year.”